Marjorie Deihl-Armstrong was an American woman with a very high IQ. She was born into a very rich family and was the only child. She was pretty and had it all. But things began to fall apart for her at an early age due to mental health issues.

She slid into the company of wrong men, marrying several times; she would end up killing two of her husbands. She planned their murders in such a way that she would not get caught. She was involved in the planning and execution of a famous bank robbery case in which a pizza delivery guy was sent to rob a bank in Erie, Pennsylvania with a bomb around his neck. The bomb exploded and the man died.

Soon after, her criminal life also began to unravel. But she never confessed, manipulating the police and press alike professing her innocence. The pizza delivery bomb case was one of the most difficult crime that police of that region had encountered. It is now a series on TV.

Let me take a look at Marjorie Deihl-Armstrong’s chart. 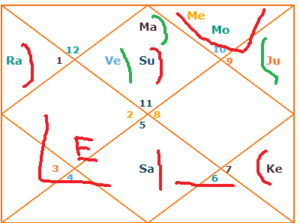