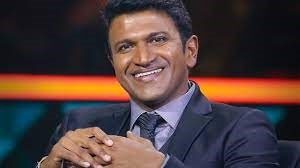 Living in Bengaluru, I can feel the sadness in the air ever since news broke of Shri Puneeth Rajkumar’s passing. I must confess I had not heard about him; however, since his death, I have read a lot about him. I have come to realize that he was a very fine actor and a nicer human being. He was a very decent person and non-controversial, and may be that is why he was not covered in the national media.

Many would not be able to do in multiple births the amount of charity that he has done in his limited lifespan. He belonged to an illustrious family but, despite that, he was very humble. His father, the late Dr. Rajkumar, was a superstar in Kannada cinema and was even given the Dadasaheb Phalke award.

This analysis is my homage to Puneeth. I pray to God that his soul rests in peace. 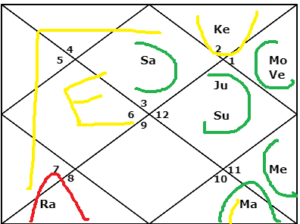 ASC Gemini 04-25-37 has Saturn 18-29-55 – Easy-going person who enjoys life. At the same time, very hard-working, pushing himself to achieve his professional goals.

6th house of Scorpion has Rahu [R] 11-05-33 – Challenging due to Mild Kaal Sarpa Dosha (MKSD). Rahu in the 6th house can be tricky and cause sudden health-related issues. It can also create secret enemies, people who go behind your back and harm your interests. This placement takes special prominence as he was going through his Rahu mahadasha at the time of his sad passing away. Rahu in the 6th house can be more dangerous due to to MKSD in the chart. This means an extremely tough time for him though he had a very strong lagna house and would have tried his best everywhere. However, health problems, internal stress and people trying to harm his interests and him not being able to deal with them made this especially tough. In some of his recent photos, I noticed he was wearing a Neelam for his Saturn. That would have helped him with his Rahu and boosted his lagna house Saturn and his career. But the size of the gemstone seemed a little too small in my humble opinion.

8th house of Capricorn has Mars 17-06-27 (Exalted) – This is a huge cosmic save. In the 8th house, Mars would cause him chronic health-related issues. However, since it is exalted, he would have been someone who takes people along with him, has excellent people skills, is a good team player, and has leadership skills. But sometimes he would go out of his way to help people at the cost of his own health and potential of stress-related ailments.

9th house of Aquarius has Mercury 07-33-19 – Excellent placement and makes him sophisticated, polite and extremely lucky – born with a silver spoon in his mouth.

10th house of Pisces has Sun 02-32-25 and Jupiter 06-08-51 (Lord House) – Will be courageous, a leader, father extremely auspicious for him and also very wealthy person, well-educated/knowledgeable, extremely lucky, would have healthy children who would be auspicious and bring him happiness.

11th house of Aries has Moon 20-08-46 and Venus 03-17-49 – Mentally very strong and close to his mother. Also extremely wealthy and famous, will do something related to the film industry or the show business, one who enjoys life and is blessed with a good wife.

12th house of Taurus has Ketu [R] 11-05-33 – Ketu makes him interested in mantra-tantra and astrology, believes in religion, prayer. Strong belief in God; does a lot of charity and good. His name would live on much after his passing.

Dasha at the time of passing away

RAH – VEN till 17/ 7/22 – Challenging time due to Rahu mahadasha and MKSD; 6th house Rahu. Though he would be living comfortably with his family, he would be uneasy because his Rahu did not let him live in peace. I have seen that he was doing some remedies and taking astrological advice because he was wearing a Neelam. That helps with Rahu. However, the size of the Neelam seemed maximum 2 ratti; in my view, it was a little small given his physique. It would have helped him in his profession by giving him a lot of drive and even set him up professionally on the footsteps of his late father. But this 6th house Rahu/MKSD would be troubling him due to sudden health issues. The picture of his right palm shows no indication of serious health issues.