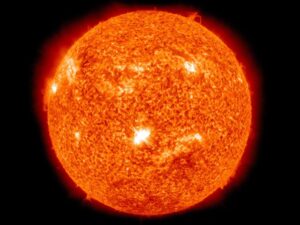 Sun is the king in astrology and an ill placed Sun can cause one to take wrong decisions in life, not be able to read a situation correct, be prone to anxiety and fear and live in misery due to fear and insecurity. Such people are loners and often very private. They suffer from illnesses due to their insecurities, despite wealth and fortune.

Let me show this by way of the case study of  Aryan Khan, the elder son of Bollywood superstar Shah Rukh Khan. I am also touching on the chart of his father SRK. 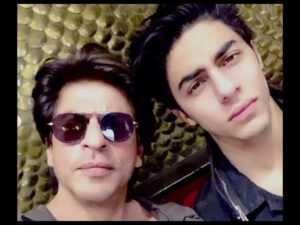 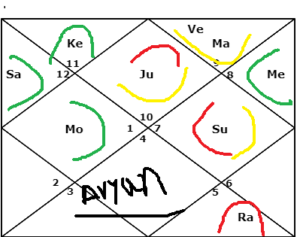 ASC Capricorn 09-57-25 has Jupiter 20-23-39 (Debilitated) – This placement with Jupiter debilitated in the lagna house will cause him trouble in all aspects of his life – primarily legal trouble, bad luck, loss of wealth, progeny issues, and not much achievement due to academics (or he would not be able to earn money through his academic learning). He would be a drain on his parents due to legal issues. He needs to do remedies for his Jupiter. This placement tells me the present trouble is serious and it’s not going to go away so soon.

2nd house of Aquarius has Ketu [R] 22-28-35 – Makes him careless about wealth and money. He would be popular with friends because he is rich, has money and is willing to throw away money. But this is not good for him from the financial point of view.

4th house of Aries has Moon 09-05-02 – Extremely auspicious placement and makes him very close to his mother and having a great deal of regard for his mother. His mother will be the source of his landed property wealth. He should not keep anything in his name – everything should be in the mother’s name – and he would take his monthly expenses from her.

8th house of Leo has Rahu [R] 22-28-35 – He could get into bad habits that could be detrimental to his health and it’ll take him some time to get out of these habits.

10th house of Libra has Sun 27-05-58 (Debilitated) – This is a challenging placement for him and would make him lose money, name and fame due to wrong decisions that he takes. It would also strain his relation with his father. This is more so as right now since he has just started his Sun mahadasha. This means the legal trouble will not end soon and will be expensive.

11th house of Scorpion has Mercury 14-16-39 – This is the place that made him Shahrukh Khan’s son. He will be wealthy, live a life of luxury and sophistication, and travel all over the world. He would be famous and belong to a famous family. He would be born with a silver spoon in his mouth.

12th house of Sagittarius has Mars 09-14-18 and Venus 13-56-00 – This is not a good house for him and again this is an indication that he would not be able to take advantage of being born in a wealthy family. He would not be able to get along with people, he would be a loner and not be open with his feelings. He could get very frustrated and angry and, at the same time, he could get attracted to the wrong kind of women and ruin his married life. There would be losses and sufferings in foreign lands due to foreign people, including imprisonment. There is what people call Jail Yog.

SUN – RAH till 25/ 2/22 – This is a very challenging time for him and there could be losses due to bad decisions and huge financial upsets that his family would be undergoing due to him. Additionally, this time is not good for his health and well-being and there could be sudden unexpected downturns that adversely impact all aspects of his life. His Sun is debilitated and his Rahu is in the 8th house. This means this time would have a defining negative impact through his life. He has to manoeuvre it very carefully, and needs to be very careful till February 2022.

SUN – JUP till 13/12/22 – Again this is not a good time and looks like his legal problems would take up the whole of 2022. The heat of the legal cases may wane after December 2022 but its adverse impacts would be there till 2026. Its indirect impacts would be there for life. He has to do the remedies for his chart and be very careful with whom he moves around.

His relations with his father are not the best

SRK ‘s birth details 2/11/1965, 1305 Hours(determined), New Delhi – He is also going through a rough time right now at the fag end of his excellent lord house Saturn mahadasha and in his SAT-JUP period till 11/ 1/24. His Saturn is placed in its lord house and that has given him immense success. But this last Jupiter sub period would be drain on his finances as well as his professional life. His 8th house Jupiter means trouble or stress from children. Through his next 11th house Mercury mahadasha, he would be able to help his son – but the son has to be very careful. 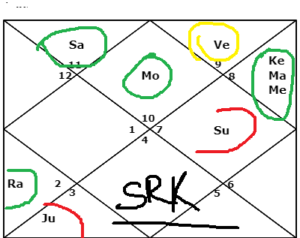