Death by suicide is very disturbing, for most of us cannot comprehend what it is that makes someone want to kill themselves. But seen purely intellectually, suicide is very intriguing from the psychological and sociological, and even the astrological points of view. Actors in India and the West have been committing suicide, much like people from other industries. However, their being in the public eye makes their mode of death much more visible. It makes us ask: Is there something in their chart which makes them turn to suicide? As far as Sushant Singh Rajput’s untimely death is concerned, it is for the authorities to decide the cause of death. But charts can shows some form of distress and the inability of a person to cope with the same. Of course, not everyone who is unable to cope with life issues turn to suicide. Thank God for that. But the inability can manifest in many ways – such as personal or professional problems. Can their chart show why this happens? 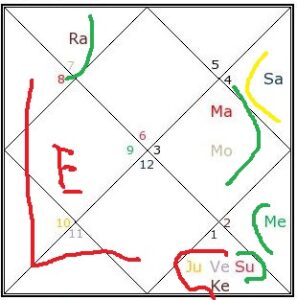 Does the chart of Indrani Mukherjee tell about her criminal mindset and fall from grace ?