Though I had not heard of this young man till the news about his sudden demise, it prompted me to study his chart since death, as a subject, has intrigued me since my early days when my death was falsely predicted in 1989.

Through my research into palmistry and astrology, I have seen that death cannot be predicted; though people with a very strong sixth sense or God-given powers may sometime gauge it. But it is something not to be misused by making predictions – that too for commercial purposes. It it can backfire on the person.

As an example, I was working as an engineer in a company dealing in central HVAC in the early 1990s. One senior engineers whom I admired due to his technical skills used to always have a cigarette in his hand. As was my habit, I saw his palm one day and I did not get a good feeling. I soon left the job and moved overseas and life carried on. After decades, I returned to India to work in the same company and saw all my ex-colleagues from back in the 1990s in very senior positions. But I noticed that particular engineer was missing. I asked one of his friends and was informed that he passed away nearly a decade back due to a heart attack. He was very young. Why did I particularly ask about that person? I myself do not know.

Let me first pay homage to young Kannada actor Chiranjeevi Sarja and analyze his chart. I read in the media article that he just got married in 2018. When someone dies so early after marriage, it intrigues me more from the astrological point of view. 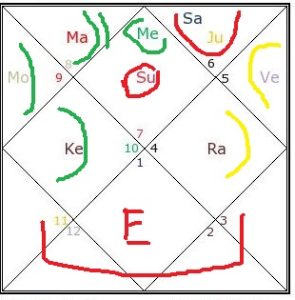 Dasha periods (at the time of death)

Can the chart of renowned astrologer Bejan Daruwalla be analyzed?