It was in the late 1990s that Tiger Woods burst upon the golfing scene. And for the next 10 years, he remained a dominant force in the sport. He was an outrageously talented golfer playing a power-packed game. Superstardom was inevitable. But then, as it often happens in life, came the problems – personal, health-related, and consequently professional. Each time he lifted himself up and kept winning. But can he recover from this recent terrible accident? Let’s see what the chart of this extraordinary golfer tells us. 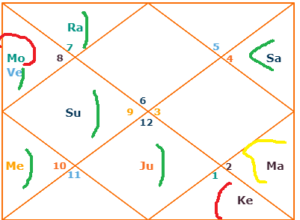 Tiger Woods has a strong personality due to the benefic impact of his father as his Sun is auspiciously placed in his 4th house. As a result he has been able to amass a fortune for himself. His Rahu in the 2nd house also makes him lucky when it comes to earning a lot of money due to the auspicious presence of his parents to whom he is very attached. His 5th  house Mercury makes him live a life of luxury since birth and have children who would be the source of solace and happiness for him. Additionally, his 7th house Jupiter, which is in its lord house, makes him have partners who would bring him a lot of luck and fortune. He would always be counting on his parents and partners for moral support till his children grow up. His 11th house Saturn would make him work very hard and make a name for himself. But he could also be mired in controversy that would get him a bad name. All this would happen because of his career.

So why have things gone so horribly wrong for him at present? We get some indication come from his retrograde Saturn in his 11th house which would give him a lot of stress and stress-related ailments in the course of his career. But there is more to it.

The answer lies in his critical 3rd house. It gives him the ability to excel in sports and enjoy life. Due to the presence of Venus here he would always enjoy the company of women and his relationships would be in the course of his professional travel. However, there is trouble here too. He has a debilitated Moon in the same house – that means emotional instability and recklessness which would lead to his romantic liaisons and marriages could go south in a controversial and public way.

His debilitated Moon period started in 2010 and this is where his life started falling apart. There were cracks in his mental strength and he has been struggling to complete the decade of his debilitated Moon with illness, injuries, relationship issues, and monetary loss. It’s all about his EQ.

After he came out bruised and battered from his Moon period, his present 9th house Mars period started. His retrograde Mars and debilitated Moon would make him upset and angry and unable to control his emotions. He would explode in anger, leading to loss in concentration and making him prone to accidents. He has to be extremely careful as due to his tough Mars period there would be a long recovery process that could go till 2027 and even then he would have medical problems.

Here’s hoping for the best for this inspirational sportsman.