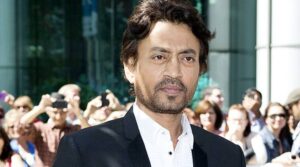 Like most I was also shocked by Irrfan Khan’s viral picture of returning back to India bound in a wheelchair. It bothered me and hence I wanted to study his chart.

It seems to me that Irfan Khan a.k.a. Irrfan Khan a.ka. Irrfan’s trusted astrologers must have foretold him about his success and fame as a marvellous Bollywood actor and it sounds like he was also warned about rough cosmic winds.

This can be estimated as he has at the bare minimum consulted a numerologist and changed the spellings of his name but could not be saved.

As with most celebrities his birth time is not known and hence I have determined it by way of birth time rectification process. 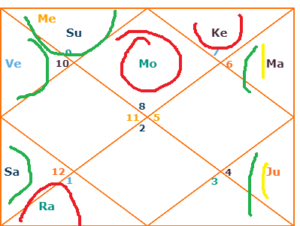 ASC Scorpion 21-08-11 has Moon 06-06-07 – Matter of great concern as Moon debilitated, hence he would have to be careful for life for stress and stress related ailments as well as emotional issues. People with debilitated Moon cannot just shrug off their past baggage and move on. Also his life and health was/is tied to that of his mother. Additionally being a Scorpion ASC made him emotional, but one to hide them, which is never good for a person having his Moon debilitated. Sometimes it’s good to cry and share your sufferings and emotions with people.

3rd house of Capricorn has Venus 06-50-01 – Good for marriage and relations with siblings but it is to be noted that it was during this dasha that his rare form of cancer diagnosis was made public. But the real culprits are his Moon, Rahu and Ketu and the severe emotional stress caused by them all through his life and they would reach its peak during his yet to come Moon mahadasha. He would get all the success in the film world during this time but it would come at a great cost.

5th house of Pisces has Saturn 00-59-12 – Close to father and also excellent for career though he would not get the share of stardom that he deserves. Lots of struggle and eventual success but with manifold stress and unmanageable stress. would have healthy children.

6th house of Aries has Rahu [R] 19-36-26 – Good for spiritual belief and mantra / tantra or its equivalent as per his faith but bad for his anger and aggression as they would only cause people to oppose him or be his secret enemies.

9th house of Cancer has Jupiter [R] Cancer 07-45-54 – Excellent as Jupiter exalted and this is the planet that made him successful in his career and earn a lot of money and fame. Also his Jupiter made him well trained in his craft and a professional and self made actor. But the planet’s retrograde motion gave him stress – which he could not emotionally handle.

11th house of Virgo has Mars 23-28-34 (Enemy) – Good for fame but delayed fame and less than what he deserved; also he would be shy by nature and not like the limelight – another factor that only added to his stress.