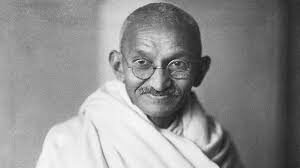 I pay my homage to this saint who went through great struggles and was instrumental in getting India’s its freedom in 1947. He was deeply pained by the cost of freedom, which resulted in the division of his motherland and the human carnage that followed.

He withdrew from active political activism and was living at the Birla house in New Delhi where he met people from all walks of life and focused on spirituality while spreading his mantra of non-violence.

It is ironic that this saint of non-violence was brutally assassinated within 6 months of India gaining its independence.

This analysis of his chart and his life is my homage to him.

It is my humble request that everyone would read about his life and take inspiration from it – as I have done while making this chart analysis. How well it all fits in! 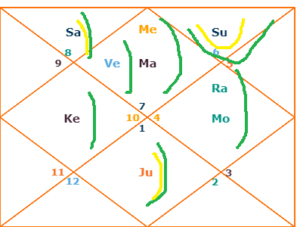 2nd house of Scorpion has Saturn 20-21-25 – Excellent professional achievements due to initial support from family but would have to face a lot of stress in his life.

4th house of Capricorn has Ketu [R] 12-08-44 – Disinterest in matters of money including accusation of wealth and property.

7th house of Aries has Jupiter [R] 28-09-47 – Marriage stable and healthy children from it but would have scant time for his family, as would be a lawyer but not practice law for long.

10th house of Cancer has Moon 28-16-39 (Lord House) and Rahu [R] 12-08-44 – 5 star house gives him mental strength and calmness that cannot be ruffled and an auspicious Rahu that would throw him to the heights of fame through his actions. He would be a fierce foe and would have his out of the box technique (non – violence) to deal with his enemies or people who opposed him.

12th house of Virgo has Sun 16-55-40 – Makes him truly a saint and interested only in the good of other people, sacrifice his life for the good of others and also his name would live on much beyond his life.

Gandhi ji Rahu Mahadasha period was from 2021 till 2039 – a time period when he was most active and set all the foundation work of Indian independence in 1947.

This is the best example of a Rahu period that can be demonstrated where a single human being achieved so much that he is called the “Father of the Nation”.

Immense self drive and a totally self made person.