Virat Kohli is an international celebrity and the captain of Indian cricket team. He is a national hero as cricket is a common passion amongst the 130 crores Indians. He is married to Bollywood actress Anushka Sharma. Even I am a fan of Kohli and it would be a pleasure to study his chart. Let me take a look at it. 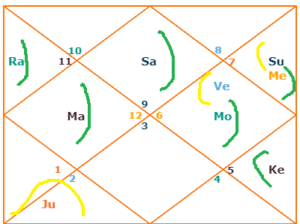 ASC Sagittarius 08-44-15 has Saturn 05-36-48 – Excellent and power packed benefic Saturn makes him a self-made person who would come up by his hard work and labour.

3rd house of Aquarius has Rahu [R] 17-05-20 – Excellent and his siblings would be the source of his strength and support.

4th house of Pisces has Mars 06-35-10- Excellent as huge support and say his mother has in his life and success.

6th house of Taurus has Jupiter [R] 09-40-41 – This is a troubling placement and he would garner enemies and people who are opposed to him which would cause him harm in his personal and professional life. He has to do the remedies and I am sure the chart of his spouse does play an auspicious role as he seems to have mellowed down after marriage.

9th house of Leo has Ketu [R] 17-05-20 – Excellent as would take him to great heights of his career and additionally he would be disinterested by his success due to his Ketu which is actually a blessing in disguise and it would help him perform better in pressure situations as cricket is his only passion and success just follows.

10th house of Virgo has Moon 00-19-37 and Venus 13-50-47 (Debilitated) – Power packed house makes him a rich person and gives him a wealthy wife too who would contribute to his success but the relation could be frosty at times. Money expenditure is also there.

11th house of Libra has Sun 19-18-26 (Debilitated) and Mercury 04-06-5 – Excellent house which would make him world famous but controversial as his Sun which makes him fearless and a born leader also makes him reckless and angry.

MARS for 7 Years from 13/ 3/03 till 13/ 3/10 – His position would be consolidated and reaffirmed during this time when he would be working very hard and Mars would help him as would the blessings of his mother.

JUPITER for 16 Years from 13/ 3/28 till 13/ 3/44 -This is a period which would challenge his personal and professional life and he as to do the remedies for his retrograde Jupiter in the 6th house otherwise his enemies would harm his career. Though due to his lagna house Saturn he would give them a tough fight as he always does.

SATURN for 19 Years from 13/ 3/44 till 13/ 3/63 – This would be a period where he would be making good money from business ventures other than playing cricket.

He is a fighter due to is Saturn in his lagna house.

He is a total family boy and very close to his mother, siblings who have a great role to play in his life.

Debilitated Sun and Venus are the reason for hardships in his life but he is lucky as one dashs was over when he was born and the other would come at the fag end of his life, still they would trouble him with anger issues and insecurity.

Remedies for his 6th house Jupiter are a must.