India has had many accidental prime ministers and Rajiv Gandhi is definitely one of them.

When I saw his chart for the first time, it surprised me – it did not seem to me the chart of a person who would be in politics or would become the prime minister of India but for the five planets in his lagna house. Those would define the family in which he was born and his complete life.

Below is his chart analysis – his time of birth on the internet seemed to be inaccurate. I did a birth time rectification for his chart and the time 0905 hours seemed to be the astrologically accurate time for him.

The twist in destiny with regards his becoming an accidental prime minister comes out in his chart. It is not that he lacked the caliber or the ability. But his dasha table is such that his time from 1981 till the time of his passing in 1991 (and up to 1999) was his challenging Rahu mahadasha. The only way he would have survived that was if he had been far away from his birth place – which could not have been the case if he is the PM of his birth country. His becoming the PM of India was also preceded by destiny, rather than his will – that of the tragic passing of Sanjay and later Indira Gandhi.

As I have always said, deaths, especially sudden deaths, can never be predicted. Similar is the case with Rajiv Gandhi. But there are indications of tough times for him from 1981 till his death. They are tough because his destiny was going against his desire. He never wanted to become Prime Minister. But family was his destiny, to such a great extent that it catapulted him into becoming Prime Minister of India. Also his Navamsa chart shows a most auspicious presence of a spouse. and one he should have always listened to.  Rest you decide. 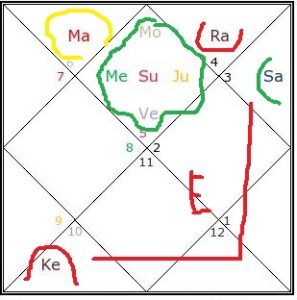 Sub period at the time of sudden death