Democrat President Joe Biden would be sworn in as the President of US in the next 12 hours, with Kamala Harris as his deputy. I had predicted their victory before the elections as you can see on the link below.

Who will be the next President of the US in November 2020?

Let me analyse their charts to see what is in store for them and the US for the next four years. 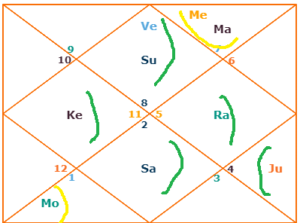 Dasha periods and its interpretation

JUP – RAH till 12/ 6/22 – Excellent time and lucky time for him that got him elected as POTUS. He has a very powerful chart but has to keep in mind that this is the last mahadasha before the start of his Saturn mahadasha. This is why, despite having Moon in his 6th house and Mars and Mercury in his 12th house (meaning that he can get very very upset and even ruin his relations with people if things do not go his way), he has won. This is due to his exalted Jupiter mahadasha and 10th house Rahu antardasha. Now comes the tough part and this means the work of governing the United States starts. This also coincides with the start of his Saturn mahadasha.

SAT – SAT till 15/ 6/25 – Good time but stress-related issues on the job would make it difficult for him to cope. This is because even though his Saturn is well-placed in the 7th house, it marks an increase in work responsibility / stress. But he would be helped by his wife and / or a female colleague. It is seen that he has to take very good care of his health and depend a lot on his spouse and also his VP Kamala Harris. Hence, her chart plays a significant role as she may have to do all the hard work. It needs to be seen if she would be as effective and powerful as Joe Biden. 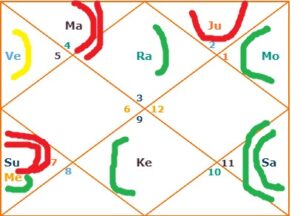 Dasha periods and its explanation

RAH – MER till 21/ 1/23 – Going through one of the best times in her life since 2012 and this continues till January 2023. She would be on the top of her political game and be a useful deputy to Joe. But her Sun debilitated in the same house as her Mercury would mean she would sometimes be uncertain and take time in decision-making and procrastinate a lot which is not in line with Biden’s quick decision-making ability. She is fit to work under Biden as she would not challenge him and be diplomatic and polite in her talks to him and all. Her Mars being debilitated too in her 2nd house would also not make her cut out from the same moral fabric as Biden and she would have a tough time being assertive without the moral direction of Biden. If Biden’s health issue crops up, in his Saturn mahadsha after mid 2022, then she would not be the ideal candidate as acting POTUS owing to the debilitated Sun and Mars and could be influenced by others in her party or family (spouse).

Biden-Harris have won in a seemingly straightforward and clear result since Biden is going through one of the best times of his life with his exalted Jupiter mahadasha, though Rahu being the antardasha or subperiod does throw in some unexpected twists and turns. But he would be able to manoeuvre them. But the only concern is that if there is some stress-related issue to Biden (in his next Saturn mahadasha), then Harris with her debilitated Sun and Mars would find it hard to fill in despite her best efforts and could be influenced by other strong politicians/people in her party and family. Since Biden’s Saturn is in his 7th house of female partnerships/spouse, it shows he would depend on his female partner/running mate or spouse for support in his Saturn mahadasha beginning from June 2022.

They would face political challenges from all and sundry and would find it very hard to make peace with a nation so divided on racial issues.  Now the real hard work for both of them starts.

On the 50th anniversary celebrations of Vijay Divas, can the chart of a 1971 Army veteran be analysed?