Robin McLaurin Williams was one of the best known comedians in the world with roles that have enthralled movie buffs. He took on challenging and out of the box roles and was rebellious as an artist and actor. He died suddenly in August 2014 by killing himself.

Let us see what his chart says about him. 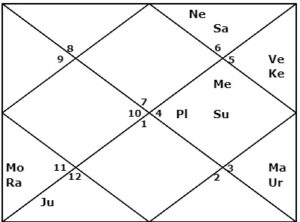 Could Cyrus Mistry’s sudden death have been predicted?

What has the future in store for ”dada” – Sourav Ganguli?