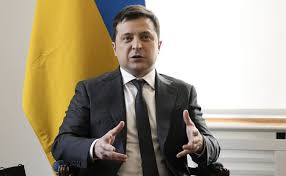 President Volodymyr Oleksandrovych Zelensky is the current leader of Ukraine. He is an ex-businessman and his last job was as a comedian. You can read more about his at the link below.

His country is at war with Vladimir Putin-led Russia. So, it is interesting to compare the charts of the two leaders side by side. 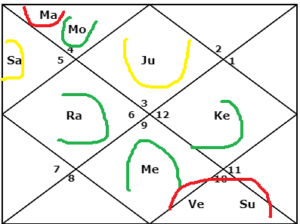 The chart of Ukraine’s president, Volodymyr Zelensky, is at best mediocre. He is a controversial figure because even his lagna house has Jupiter retrograde and enemy-positioned. So he will not be lucky in life. This is just a flash in the pan kind of a chart; so, he will have the propensity of taking wrong decisions and he will have many professions in his life. Right now, maybe being the president of Ukraine is during one of the best times in his life!

His second house is very interesting. Though he’s a very intelligent fellow, he gets guided by information that is not factual since his second house has Moon in its lord house, which means he will be wealthy. At the same time, Mars debilitated in the second house means that the wealth would also be going out; so, if he made money in the past, right now all that wealth is being wasted.

But his 2nd house becomes a tricky house because it gives Zelensky the ability to argue endlessly people. He is the sort of person with whom one does not want to have an argument, because as long as things are in his hand he will not let go of the argument. He will keep on arguing at the cost of ruining everybody around him; including, in his case, his whole country.

His 4th house has Rahu; so again, basically he is a family-oriented person and also married to a stable partner who will be the source of material and home luxuries for him. He would be polite and sophisticated in his words.  Due to this eighth house Sun and Venus, he is under stress and most of his stress would be due to the opposite sex; so there may be some stress in his marriage also right now. But Sun in the same house as Venus tells me that he would take out his stress in a different unrelated way and he would not take the best decisions or the best-informed decisions when under stress. This is very dangerous because this tells me that first of all, this person will have a propensity of being a troublemaker. So basically, he will look for trouble, get in there and try to make more trouble. This is mainly due to his lagna house Jupiter retrograde/enemy positioned and his 2nd house debilitated Mars. Plus his 8th house does not bode well for his health and well-being.

So even though he’s very young, he has to be careful of his health/well-being, because when he gets very upset and angry, he would have the tendency to take it out on himself. In the context of the Ukraine-Russia war, this is be a person who would not like to be captured alive.

Right now, luckily for him, he’s going through his lord house Moon mahadasha. Moon is excellently placed and that is why he is able to give stiff resistance. But, at the same time, what he is doing may be ill-informed because he’s constantly fighting with a powerful enemy. That is due to his debilitated Mars, which is not letting him see logic. Right now, in his Moon-Saturn subperiod till end 2023, he could appear calm, because he has mental strength. But he would be very disturbed and he could take wrong decisions. So here is a person who is not thinking right at present since he would easily come under the influence of other parties and wreak havoc on his people and the world at large.

So, even though he’s going through his auspicious Moon mahadasha and he would be getting a lot of help in this war, he has to be careful. In fact, working to occupy this powerful position may be one of the worst decisions he has taken and this is what happens when people with average charts accidentally occupy critical positions.

I have studied the chart of Prime Minister Narendra Modi and also the chart of the present US President Joe Biden and the past US President Donald Trump, and they all have very powerful but stable charts. They would never act in haste.

The way forward for me to get this person under control is either call on Prime Minister Modi or past US President Donald Trump. They have the strength in their charts to control this guy because as I had told in my prediction for Biden – his current time is very tough; he is under a lot of stress and pressure and he is not able to tame this person.

Partially one of the reasons for the war is the personality of Putin and Zelensky – one is totally unhinged and the other one he doesn’t care what happens to him. So, they need a strong leader to keep them in check. Sadly, Biden is not that person, so some strong leader has to put sense in their minds. Otherwise, these two do not seem inclined towards stopping this Ukraine Russian conflict.

This conflict can be solved via talks also but Putin and Zelensky have so much ego, so much anger in them. They have very different charts but this is the thing that they have common in them; that it’s very difficult to control them. One is all out even at the cost of his life. He just doesn’t care – the Russian President wants to have Ukraine as part of the Russian Federation. The other is not able to think right. So, the Ukrainian president has taken wrong steps at the behest of other people which have landed him and his country in this mess.