Neerja Bhanot, the brave purser on the fateful Pan Am 73 flight, may have had a short life. But through her selfless act of saving passengers on the hijacked airplane on September 5, 1986, she left a tremendous impact on the psyche of the world. Her courage was extremely rare; a testimony to that fact is the Indian government conferring the Ashoka Chakra, the country’s highest peacetime gallantry award, on her.

To refresh your memory, here is a link about her exploits. 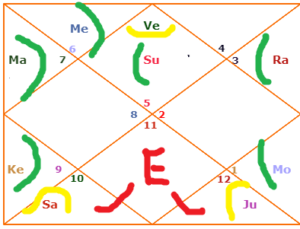 ASC Leo 25-32-47 has Sun 20-21-43 (Lord House) and Venus 22-32-41 – Excellent house, making the native bold, courageous and a leader par excellence. The native would also be a physically attractive and pleasant person. She would be popular with friends and family and have a charmed life. Neerja Bhanot passed away in her auspicious Venus mahadasha while working as a flight attendant and sacrificed her life to save others. This was due to her lagna house. She went away during one of the best times of her life.

2nd house of Virgo has Mercury [R] 11-47-52 (Exalted) – This is an excellent placement for the native. She would be wealthy and her parents would be the source of strength for her. She would imbibe all good qualities from them. She would be soft-spoken and also like to work in the service of others and help people. Mercury being retrograde means she may not tolerate slackers and lazy people.

3rd house of Libra has Mars 03-07-39 – Excellent for support of siblings and also makes her a team player and leader par excellence who would have courage to stand up for her teammates.

5th house of Sagittarius has Ketu [R] 24-08-55 – Ketu even in an auspicious house would lessen the chances of her bearing children. Its mahadasha, so early in her life, would render it nearly null and void in terms of its impact.

6th house of Capricorn has Saturn [R] 24-38-18 (Lord House) – Lord house Saturn in the 6th house and retrograde means she would do well in her profession and would be well-employed. But, at the same time, the placement of a retrograde Saturn means her profession would be the reason for her health loss. In her case, this means the loss of her life. But as Saturn is placed in her lord house, there would be rewards and recognition for her even after death in due to her profession.

8th house of Pisces has Jupiter [R] 24-50-58 (Lord House) – This is also a huge cosmic save like her 6th house since retrograde Jupiter in its lord house. Hence, she would be lucky and do very well in her studies. But it being in the 8th house would creates obstacles for her when it came to having a family life and becoming a mother. Additionally, her 7th house is also empty; hence, marriage or family life is sustainable if she gets married after careful chart matching – otherwise it could end in legal issues and divorce.

9th house of Aries has Moon 04-11-37 – Excellent house and would make the native excel in her profession, live a life of comfort and luxury and settle in a place close to the water. Her mother and father would be very close to her. This also makes the native mentally strong.

11th house of Gemini has Rahu [R] 24-08-55 – Rahu is placed excellently for the native and would make her famous and well known and also be extremely popular. But Rahu is always a tricky planet. In the native’s case, the popularity and the recognition came after her passing away.

Dasha in her lifetime and time of death

VENUS for 20 Years from 25/ 6/68 till 25/ 6/88 – Excellent Venus mahadasha which made her into the person she was. She passed away at the fag end of the dashas at one of the best periods in her life when she went beyond the call of duty.

She had a very powerful chart with three planets in their Lord House and one planet exalted. However, two of the Lord House planets were retrograde and in evil houses. The exalted planet was also retrograde. Hence, hers would be a life where she would be fighting the bad elements of society, be in her personal or professional life. Taking her Lagna House into account, this is the chart of a no-nonsense human being who would face huge challenges but would fight them bravely, without thinking of the consequences. A true karam yogini.

Placement of Venus and its mahadasha meant she would not be successful in her married life. Additionally, her 6th and 8th house planets being in their lord house, along with an empty 7th house, only made marriage and a family life more difficult.

Her lagna house with the Sun’s presence would mean she would be a no-nonsense leader: Not a street-fighter kind of leader but a sophisticated person with high moral values. Her exalted Mercury in her 2nd house makes this possible.

Is it any wonder that she is the youngest recipient of the highest Indian civilian bravery award, the Ashoka Chakra, as well as awards from the American and Pakistani governments and her employer.

What does the birth chart of ace boxer Mary Kom say?