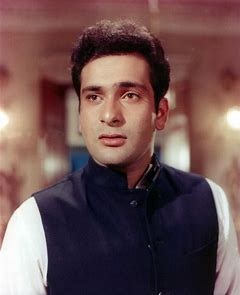 Rajiv Kapoor, the less famous Kapoor, who could never be as successful as his elder siblings. Can his chart show why this was so? I started to study his chart with this premise. But as I proceeded I realized his chart is also a perfect example of how the positives and negatives of different planets in different houses can negate each other. It is important to note, therefore, that a chart needs to be studied in its entirety to understand why you, I or anyone else for that matter are who they are. 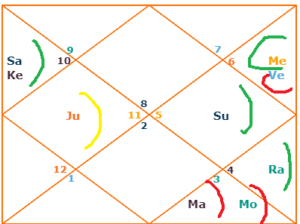 ASC Scorpion 19-39-07 – Emotional person and able to protect his interests, though can have anger outbursts when upset.

3rd house of Capricorn has Saturn [R] 12-58-48 (Lord House) and Ketu [R] 14-09-49 – The Saturn could ensure professional success. Again, because of Saturn, he would be well assisted by siblings in his profession and would do well, much above his expectations. He is lucky by birth. But on his own and due to his debilitated Venus in the 11th house, success as an actor would elude him. He would be religious by nature.

4th house of Aquarius has Jupiter [R] 15-14-39 – Inherited landed property and wealthy, which could be the source of legal issues in his life. Would be attached to his mother who would be the source of his spiritual leanings. Trouble having his own children though would support a lot of people due to his wealth.

8th house of Gemini has Moon 14-00-26 and Mars 08-30-07 (Enemy) – Worrying and sensitive by nature and this aspect would impact his personal and professional life as he would not be able to get along with a lot of people. Additionally, having mangal dosha also means he would have marriage issues.

9th house of Cancer has Rahu [R] 14-09-49 – Would earn a lot of money on his own and would do well in his profession and this would be a source of wealth. But he would do so only in a risky and speculative field, for example, production and direction and even gambling and horse racing and lottery.

10th house of Leo has Sun 08-19-33 (Lord House) – Father would be very auspicious for him and would be the source of immense and lifelong wealth for him. He would also be a fearless person who would not be afraid to seek his mind. This is never a good combination given his 8th house propensity not to get along with people.

11th house of Virgo has Mercury 00-33-60 (Exalted) and Venus 24-13-05 (Debilitated) – Decisive and roller coaster house which, on one hand, would ensure that he lives in luxury all his life, is a person with a large heart and one who would do a lot for other people and even social causes. He would be very polite when he wants to. But his debilitated Venus would make him indulge in bad habits when upset (which would be a lot given his 8th house planets). Moreover, women would be the source of his suffering in his life and he would not be able to find a woman who would give him lasting peace of mind.

Dasha at time of death

Mercury mahadsaha from 28/ 9/05 till 28/ 9/22 – He was a good soul and his exalted Mercury mahadasha would ensure he lived a life of comforts and also did a lot for the comfort of others. But his debilitated Venus in the same house also meant that he would be drawn to bad habits to wipe off the pain wrought by his 8th house planets.  He passed away at the fag end of his exalted Mercury mahadasha though his Mercury gave him a lot of comfort. Due to his Moon and Mars, he faced an emotionally rough time. His debilitated Venus in the same house as his exalted Mercury was both a blessing and curse for him; he would be prone to bad influences due to his Venus. Additionally during the period of his death; i.e. MER – SAT till 28/ 9/22, though on the surface he was living a good life, behind the surface there was additional pain. His Saturn, though in its lord house (being his 3rd house of siblings), was retrograde. It caused stress due to his elder sibling Rishi Kapoor passing away and that would have given him worries that he would not have been able to handle. Hence, despite all the wealth he could not take the stress any more.

Worry and anger due to his 8th house Moon and Mars, failure in personal life and bad habits due to his debilitated Venus, and the stress of the passing away of his elder brother were too much for him to handle and he could not complete his Mercury mahadasha.

Sometimes a very good time (like his exalted Mercury) can be counterproductive if enjoyments are not controlled. As a result, he could not face even the slight stress he would have faced in his MER-SAT period. Additionally, his exalted Mercury period was about to end and his Ketu mahadasha was about to start. His Ketu was in the same house as his Saturn and he would have been feeing stress due to the passing away of his sibling and related professional worries, which were the last straw.

He had a roller-coaster chart and life.

What makes one a famous rapper ? Can it be explained by way of a case study?