The answer is Saturn. If debilitated, retrograde or when placed in the evil 6th, 8th and 12th houses; it is the most malefic planet among all the planets.

I often encounter people with a challenging Saturn who are presently going through their Saturn mahadasha and I know what to expect as they generally become their own enemies as their career fall is so deep that they are unable to cope with the losses and the rest depends on their other planets and the spouses chart but even with an otherwise excellent chart, it does trouble them deeply.

Saturn is a naturally malefic planet and makes one work hard. It does not give anything for free, but when ill placed it either makes the person tamasic or ones hard work gives no result.

Saturn represents one’s karma or actions. For people living in the world it is the planet associated with material success and linked directly with one’s career.

A malefic Saturn makes one tamasic and such a person is lazy and only makes big plans or castles in the air and does not do any karma or take actions for the plans to turn into real achievables. He becomes his own worst enemy. An ill placed Saturn can also cause poverty, deprivation and take away one’s energy and vitality. 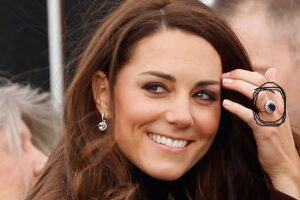 Strong remedial actions are required, which include spiritual and gemological remedies for cushioning the blow of Saturn and I have personally had experience with people whose professional and personal lives have been turned around once the gemstone has suited them, but it has to be tested.

I will discuss the highlights of the horoscope of an IIT-Kharagpur educated engineer, an ex bureaucrat who is comfortably retired now at the ripe age of 84 years, but who in the prime of his career left the Government services and after that struggled a lot in his profession due to his retrograde Saturn in the 6th house, even though it was in its lord house.

Other than his Saturn he has a powerful chart and hence after 19 years of struggle and working for pennies and losing all his savings, his career suddenly picked up in 2001 when he was offered a position in the board of a company in which he served till 2 years back.

I first saw his chart in 1997 when he was going through his struggle and asked him why he had taken such a decision but as is the case with people having retrograde Saturn in the 6th house, he would not admit that he had made a wrong decision.

Mind you due to his powerful chart he never lost his zest or energy but made critical errors of judgment that cost him his career, which otherwise would have taken him to the top of our Government services and become a known person pan India. 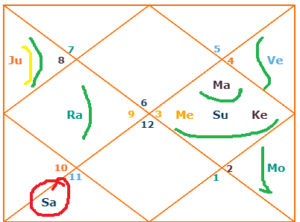 The moon and your destiny

Can a palm tell signs about clearing the UPSC ?