Harbhajan Singh is an ace Indian spinner and also called the Turbanator due to his excellent bowling skills.

He is known for controversies too – as was the incident related to him slapping his fellow teammate Sreesanth, which is to be condemned as physical violence has no place in any civilized society.

Let me take a look at his birth chart. 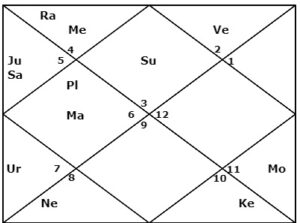 Which planets are helping India Foreign Minister S Jaishankar be the dynamic influencer that he is?