Skip to content
Bill Gates, was the first name of what was to later become a trend of billionaires coming from the Silicon Valley in the USA. He founded the Microsoft and his success story is known by one and all throughout the world.

One of the second richest men in the world with assets over 100 billion USD; he is totally engaged in the works of his multiple charities along with his wife throughout the world and is accorded the respect of similar to a head of state wherever he goes.

As with most public figures his exact birth time is not known and hence I have determined his astrologically accurate birth time by the birth rectification method.

This would be done by using the vast amount of information available in the public domain about him and then by an iterative and elimination process draw multiple birth charts (for the day and place of his birth but for different times). Finally I would independently determine his time of birth and hence his birth chart and predict his future.

Lagna Chart and its analysis 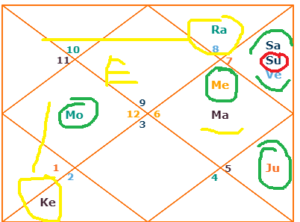 Can astrology give us a clue about Sushant Singh Rajput’s sudden death?

Does the chart of Indrani Mukherjee tell about her criminal mindset and fall from grace ?