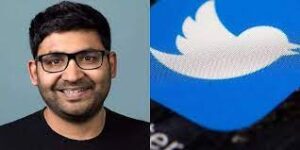 Dr. Parag Agarwal, Ph.D. (Stanford University, USA) has just come to the limelight, post his appointment as the new CEO of Twitter. I did a study of his background information available online, to get an idea of his life till date and to predict his future. What planets does it take for one to become the CEO of a top US company? This has become a trend now with Indian born and raised people doing well in the US and I was happy at his achievement and thought of taking a look at his chart. Generally, as per my humble knowledge, one needs powerful and auspicious planets Jupiter, Saturn, Sun and Moon for such an achievement. Let’s see what his chart study unfolds. 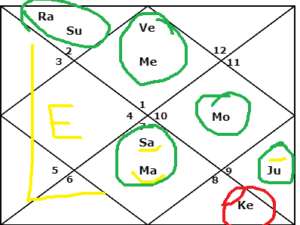 ASC Aries 15-52-45 has Mercury 11-06-52 and Venus 29-26-17 – This is an excellent life defining house and makes him very active aggressive, pushy and adventurous, while at the same time being a very stable person; he would be sophisticated and polite in his manners; would have lived in excellent conditions right from his birth and also would be good looking and his spouse will  play a very major role in his life; mostly it will be positive but sometimes there could be some friction between the couple; though it is nothing that cannot be managed by them. This as his Saturn is exalted in the 7th house, which is also populated by Mars, but it is retrograde; so he would have a powerful companion and a co-professional as a wife and they would be very wealthy, self-made people.

2nd house of Taurus has Sun 06-27-37 and Rahu [R] 13-25-34 – Very good for intelligence (IQ), health and inheritance from parents, father well educated and auspicious for him and this placement would give him leadership abilities. Though he would have the general temperament of keeping quiet, not talking very much, but when he needs to, he can express his opinions without fear and sometimes that may hurt people. Rahu will make him excel in engineering or technical trades and also settle abroad overseas or far away from his place of birth; due to it he will earn huge amounts of money or wealth late in his Rahu mahadasha.

7th house of Libra has Mars [R] 23-48-44 and Saturn [R] 18-10-14 (Exalted) – Very lucky as retrograde Saturn is exalted, hence he would do very well in his profession, rise very high and also he would be handsomely rewarded for his hard work; would occupy a position of authority and administrative responsibility;  though due it being retrograde, there would be lot of stress in his domestic life and at work due; there could also be time to time arguments at home; though it is nothing that cannot be handled by him and this placement also makes him a manglik and so should be his spouse. After his present Jupiter mahadasha and from 2030 onwards; his exalted Saturn mahadasha would start and he would do better in his profession during that time, make a lot of money and also devote a lot of time to his spouse and family – that is children and parents. He would need to be a little careful of his health 2030 onwards.

8th house of Scorpion has Ketu [R] 13-25-34 – This is a chart of a person who has no time for anybody, except his parents, spouse and children and that too, he would have to squeeze-in the time; most of the time he would be working and could have stress or lifestyle related impact on his health regarding which he has to be very careful in the short and long term.

9th house of Sagittarius has Jupiter [R] 18-39-43 (Lord House) – Extremely lucky as retrograde Jupiter in its lord house being his 9th house and is helped/helping him with very good luck, excellent family background, accolades, professional success and achievements. Due to this placement he would not only do very well in academics but in all sphere of his life – career and personal life; though there could be time to time stress and struggle due to Jupiter being retrograde, but as mentioned as it is in its lord house; success would be his. After lots of studies and hard work and toil he would get success and achieve what he wants , be highly educated, have intelligent children – though he could be having them late.

10th house of Capricorn has Moon 16-43-04 – This is an excellent placement and gives him a strong and stable mind (EQ), immense wealth, life of luxury; he would be very successful in his life and occupy a position of authority, his mother would be very auspicious for him and would be the source of his strength.

Mars from 8/ 5/89 till 8/ 5/96 – Insignificant years spent in home/early education and there could have been slight bottlenecks/disruptions in the family unit.

Rahu from 8/ 5/96 till 8/ 5/14 – This the time when his life really picked up and he got an inclination for science and a scientific temperament due to Rahu and started to do well in academics; by the end of this auspicious period he would have a doctorate in engineering from the most prestigious institutes in the world and be well employed, the perfect launch for a career!

Jupiter from 8/ 5/14 till 8/ 5/30 – His present mahadasha in which he would do well in his career, and family life, earn excellent wealth, be lucky at whatever he does; but it would come after a lot of hard work and toil; he would become a father and get married too; though there could be some tense times in his personal life and childbirth would be late. In the end his Jupiter being in its lord house saves him all the time, despite being retrograde. So his stint as Twitter CEO would be challenging for him.

Saturn from 8/ 5/30 till 8/ 5/49 – Saturn exalted in his 7th house is an excellent placement, due to which he would excel in his profession, would be very active and full of ideas, his spouse would assist him in his profession, which would be a source of material luxury for the couple. However, it being retrograded could cause some stress in the family unit due to their busy lives. Though again his exalted Saturn gives him excellent professional rewards.

Very lucky as his lord house Jupiter mahadsha fell in the prime of his life and this ensured that he excelled in his career, despite obstacles.

He would only do better in his next Saturn mahadasha and hence for the forceable future; he would shine via his profession.

His is a hardworking, self-made person and comes from an educated family, with both parents being auspicious for him.

His stint at Twitter CEO would test his professionally.

What impact do bad planets have on one’s life? Can it be shown by way of a case study?

Can the birth chart of cricketer Harbhajan Singh be analyzed?