India has descended into gloom with the tragic and sudden death of one of its finest soldiers and its first Chief of Defence Staff, General Bipin Rawat. Hence, as a mark of respect I am doing his chart analysis. This is to understand the qualities that made him who he was, and if there were any indications of sudden death in his chart. I believe that death is something that cannot be predicted – and this is especially true of sudden deaths. So let us see what his chart tells me.

Cause of death – Helicopter crash 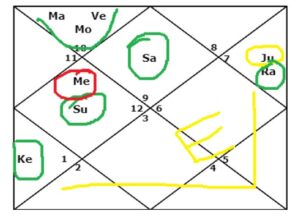 ASC Sagittarius 15-46-25 has Saturn 02-05-43 – Courageous, bold, energetic, aggressive, a born leader, hardworking, active, and would move up in life by way of hard work. He would be working all his life – from birth till his last breath. Saturn takes special prominence right now, since from 2008 till 2027, he was undergoing his auspicious lagna house Saturn mahadasha. This was the time he would have done well in his profession, the result of working hard all his life — though he would have made people jealous along the way die to his no-nonsense approach. It is in his extremely auspicious SAT-MON/MAR period till September 2021 that he became the CDS. And he left us after that, in his present tricky SAT-RAH period (till April 2024). This was mainly due to MKSD, whose impact is maximized during Rahu mahadasha/antardaha. His next Mercury mahadasha would have been very troubling for him (after 2027). His auspicious but tricky Rahu released him to the heavens and away from his grieving children and nation owing to Jupiter being in the same house as Rahu.

2nd house of Capricorn has Mars 05-42-24 (Exalted), Moon 11-32-06 and Venus 17-59-38 – Exalted Mars in the second house is a huge blessing. It means he was born in a very good family. He had excellent leadership skills and controlled aggression; so he was aggressive but the aggression was controlled to ensure results and the focus was all always to do the tasks at hand. So, an exalted Mars gave him single-minded focus to do the task at hand; excellent leadership qualities and also team-building qualities. He would be very strong mentally and tough-minded, with a calm demeanour, does not lose his co. He would would live a life of comfort, with both parents being auspicious for him. He would also be married via the parents or via the family to a lady from a very distinguished family. They would be a wealthy couple – they would come from wealth and they would be a wealthy couple themselves.

4th house of Pisces has Sun 01-30-05 and Mercury 12-49-39 (Debilitated) – This makes him extremely bold, courageous, a leader, daredevil, and not scared of anything. His debilitated Mercury makes him say things as they are – but he would do so politely, He would be no-nonsense and would not shirk from telling even the high and mighty what was in his mind – but he would do it politely and in a proper way. He would be the kind of person who would be uncomfortable sitting in luxury or air-conditioned offices; his life would be spent in the field, in rough terrains and practically living out of a suitcase in rough and tough environments and with rough and tough people. So sophistication is something that he would not be fond of; he would be the typical son of the soldier and fond of rough and tough people. Mercury being debilitated is actually not a good placement and this could also mean that sometimes he would say things publicly and that could get him into some trouble.

5th house of Aries has Ketu [R] 10-11-42 – 11th house with retrograde Jupiter/Rahu combined with a retrograde Ketu in the 5th house means he would not have enough time for any member of his family or for anybody except for his job – except for his karma for which he has taken birth. He would live in rough and tough environments all his life. This placement also gives him mild Kaal Sarpa Dosha (MKSD). That is a deciding factor. He had a good married life as the marriage depends 50% on the chart of the spouse and his Venus is extremely auspiciously placed in his second house; so, due to his family he would be very lucky. But he would not have any time for his personal life, for his children or for his household; he would totally dedicated to his work.

11th house of Libra has Jupiter [R] 07-10-16 (Enemy) and Rahu [R] 10-11-42 – Name-fame is there, as is luck. He would be jet setting across the world, meeting the high and mighty and the powerful but he would always be a soldier at heart and like to be amongst his soldiers, the fighters. He was a real warrior and though he rose to the highest position in the defence forces in India but at heart he always wanted to be with the soldier or he always wanted to be in the field. His education would be good. But again, there would be no time for children. This house has to be analysed little more carefully, as retrograde Jupiter means that basically his children would suffer and Rahu in this house also means that the relation with the children could be sometimes be tricky – perhaps due to him always being busy and not having any time for much beyond his job. Again, this house takes prominence as he has MKSD and it’s at its peak in Rahu mahadasha/antardasha. His Rahu is auspiciously placed but Rahu is always tricky. So, it is very interesting to see what his Rahu has done – it has basically taken him away from all of us, most importantly from his children, his from his employer/army/defence forces/country. But, it has made him a martyr, who died on the job and doing what he loved. Rahu which tends to take people away to long journeys in aeroplanes crossing continents; here it has taken him very far away from all; via a military helicopter journey; and from his children, who will suffer the most because ofretrograde Jupiter in the same 11th house.

Saturn Mahadasha – From 22/ 1/08 till 22/ 1/27 – Excellent time for professional success and glory but no indication that it would take him away to the heavens.

Saturn – Rahu Antardasha – From 4/ 9/21 till 10/ 7/24 – Tricky time due to MKSD/Rahu and suddenly left us while doing his job; at the fag-end of his Saturn mahadsha. After which, his tough 4th house debilitated Mercury mahadasha would have come. Due to his good karma and him being a Karma Yogi, as Saturn is placed in his lagna house, God did not want him to suffer due to his Mercury.

Mercury Mahadasha – From 22/ 1/27 till 22/ 1/44 – Tough time which he did not see due to his good karma, a true karma yogi who lived and left with his partner for the heavens. This tough time would have probably been the most likely time for his natural death.

I would like to say that hindsight is 20/20 and hence this is more an analysis of his chart.

If I had seen this chart a year back, I would not have been able to predict his sudden and tragic death but I would have been worried on some accounts. First, his MKSD, whose impact is more in his Rahu periods/sub periods and he was going through his SAT- RAHU subperiod, which started this September. Hence MKSD would give him a daredevil, care a damn attitude. He would not think twice over risking his life for his duty and the chances of this is more in his Rahu period/subperiod. Since his Saturn is in his lagna house and its mahadsha is going on right now, this risk being work-related is much more. The second thing that would have worried me; when you see such a successful person who has reached the pinnacle of his professional life, then you see that his next mahadasha, in five years, is his debilitated Mercury mahadasha. That would have made me think that something is going to happen to him in his Mercury period, such as a sudden health issue, etc. But he did not live to see his debilitated Mercury period.

For example, if someone had asked me whether after his retirement he would become an ambassador or hold some high diplomatic position for the next decade, etc., then I would have told him that it is very difficult as his time is tough.

He passed away suddenly on a Wednesday, which is the day for Mercury and his Mercury was debilitated.

As I said, he liked the rough and tumble of life.

Can the chart of troubled Rhea Chakraborty be analyzed?

Do we have fortune tellers in the likes of Marie Anne Lenormand who made uncanny accurate predictions?