It is said that the day you stop learning you are dead. I remain a student of astrology even after so many years. When I learn something based on my practical experience in reading charts and palms, I am intrigued, and I want to know more. I had started decades ago by reading some the astrological books of renowned astrologers and palmists. Much later I read about religion in some detail. For the first decade, I had to frequently refer to the notes; but now, with learning and experience it has become second nature.

Whenever I make predictions, my inputs come from the birth chart according to Vedic astrology, birth chart according to Western astrology, the palm, the timing of the questions, any vibrations that I get by reading the question or talking to/meeting the person. There is an immense quotient of intuition, or sixth sense fused with all the above information. I do not give any label to my style as I avoid being pigeonholed by labels.

My take is always to simplify readings and focus on accurate predictions – which is the main reason people turn to astrology, thereby not getting stuck in semantics. My detailed reports are written such that even a layperson, who does not know anything about Vedic astrology or Vedas or Hinduism, can understand about his/her chart and life.

Some people who get a report from me know that if there is an indication of Very Mild, Mild or Full Kaal Sarpa Dosha in a chart (happens when all or a majority of one’s planets are between Rahu and Ketu in their lagna chart), I always write a phrase “ I would term the native being under the influence of ‘Very Mild/Mild/ Kaal Sarp Dosha (VM/M/KSD)’ for which she or he should do the remedies. Though the term sounds scary, but I can assure the native that he or she has to focus on the remedies. “

This caveat since the complete chart must be studied. A sectional planet-wise analysis of the chart must be avoided in all cases since it does not give the complete picture or an accurate analysis. A person is the result of all the planets in his/her lagna chart and sometimes even the empty houses also tell something.

Additionally, when there are countless number of doshas or yogas, I have, based on my most humble experience in predictive astrology, come to believe that only two matters in terms of impacting one’s life on planet earth (a) Mangal Dosha or Manglik & (b) Kaal Sarpa Dosha. The rest just take the astrologer towards the slippery slope of making partial/inaccurate analysis of the charts. Even while analysing the charts with the above two doshas, the rest of the planets and their positive or negative impacts must be carefully seen.

I always make it a point to support or explain my rationale by way of case studies. This, since astrology is vast with so many permutations and combinations – 9 planets and their individual qualities and 12 houses. So, it is seldom apt to make a sweeping statement based on sectional chart analysis or selective planetary positions, in my humble opinion. The point can be better put across through a case study. In astrology, every chart is different, the exception being identical twins, even for them it can be confirmed only after calculations.

Below are the charts of three brave military officers who all had separate charts in most aspects but there were one or two similarities that made them valiant fighters. 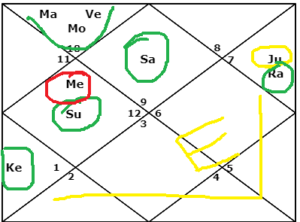 (B)Late Maj. DB Sabharwal, my relative and a 1971 veteran who was paralyzed below the spine in 1971 (below) 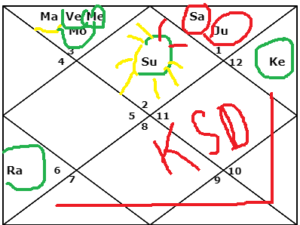 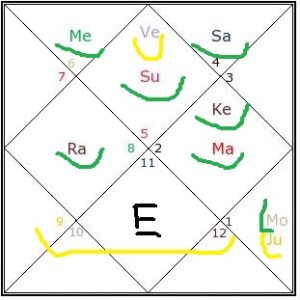 As mentioned, while their individual charts are markedly different and can be seen in the links below, but you would notice that they all had Very Mil/Mild or Full Kaal Sarpa Dosha (marked by the red or yellow line) and also their Sun was excellently placed; in their lagna house in the cases of my uncle Late Maj. DB Sabharwal (Retd).and Shaheed Captain Anuj Nayyar; while in the case of Late CDS General Bipin Rawat; Sun was auspiciously placed in the 4th house, though he had other powerful planets in his chart, like his lagna house Saturn. Also, for all of them – their Rahu and Ketu are also both placed in auspicious houses. Hence such people even though have Kaal Sarpa but it’s a Yoga or Kaal Sarpa Yoga; it made them courageous to the extent of being daredevils, not look back at any cost once angry, principled and also impatient at the same time and generally their focus was mostly their career/country at the cost of their family/personal life. Some amount of personal suffering comes with it, but their names live on, and they become immortal. Also, as Rahu and Ketu play an important role in their charts and depending on what dasha, the chances of sudden events happening – both good (for the country) and bad (immediate family) are high. Late Maj. D B Sabharwal never got married after getting paralyzed suddenly and most shockingly (The Indian Army had won and ceasefire had been declared and his regiment were deep inside enemy territory, he had just come out of his bunker to smoke a cigarette, when he was shot from the back) after taking a bullet to his spine in 1971; Shaheed Captain Anuj Nayyar, MVC was unmarried and left us suddenly, and I am sure Late CDS Gen Rawat also gat scant time for his family and his demise too was most shocking and sudden. But they all will live in our collective memories and hence for these 3 cases I can say that yes, they had Kaal Sarpa Yoga but even that came at a huge personal cost of life and / or limb. It’s a delicate call !

You can read the analyses here:

Why did Shikhar Dhawan’s marriage fail ?