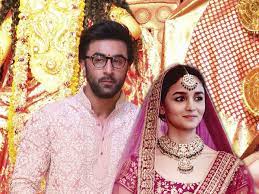 Ranbir Rishi Kapoor needs no introduction and below I have done an analysis of his chart in August 2019 by tweaking his time of birth by birth time rectification as per details available in the public domain about his life. As is evident he is really born with a silver spoon in his mouth. I had also done the chart analysis of Alia Bhatt in September 2020 and let me now take a look as to how they would fare as a couple. 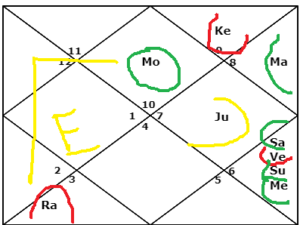 ASC Capricorn 13-17-12 has Moon 16-36-10 – Excellent for mental strength, comforts of home and wealth
6th house of Gemini has Rahu [R] 15-15-03 – Tough as there would be frequent opposition to his idea by family and tension in domestic life.
9th house of Virgo has Sun 11-20-16, Mercury [R] 19-17-38 (Exalted), Venus 01-50-34 (Debilitated)and Saturn 29-06-17 – Excellent for career as Mercury exalted though retrograde, so there would be time to time tiffs that he to people close to him and Sun and Saturn excellently placed but Venus debilitated and hence would have many romantic liaisons but would be unsuccessful in converting them into marriage also could fall prey to addictions. He is plain and simple a creation is the Kapoor Khandaan / Bollywood contacts or he would have not been in Bollywood, a flash in the pan success at best.
10th house of Libra has Jupiter 17-27-35 (Enemy) – Excellent for wealth, legal issues possible
11th house of Scorpion has Mars 12-10-04 – Excellent for name and fame as Mars in own house – would be fearless and take challenges head on also would be bold by nature, also makes him a Non – Manglik.
12th house of Sagittarius has Ketu [R] 15-15-03 – After certain time would follow in footsteps of family and become deeply spiritual. 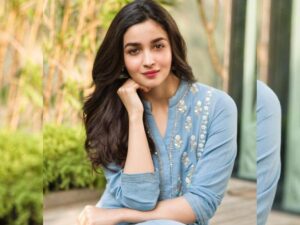 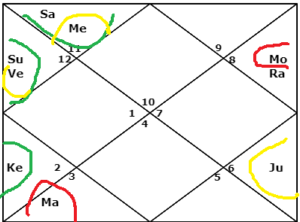