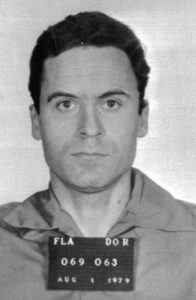 I have a deep fascination with death, death penalty and criminals or crime series. I had long back heard about serial rapist and murderer, Ted Bundy and recently I have again watched about his life and crimes on Netflix and Amazon Prime shows. They are well produced and it again ignited by interest in him. It again reminded me how this sophisticated appearing, smooth talking and seemingly charming person had the evilest of minds and raped and killed more than 30 young women; coast to coast in the US, in the 70s. The last of his victims, being a 12 years old child. He was given the death penalty and was executed at the Florida State Prison in 1989. Till the late 60s; as per public records, he had a seeming normal life with a stable girlfriend and her daughter – both of whom he actually spared. What happened in his case? Was this a trend for murder/rape; till he was finally caught in the mid-70s? Do such people possess dual personalities and are mentally sick or just evil? Let us see what his chart says. The irony is that he was studying law when arrested. 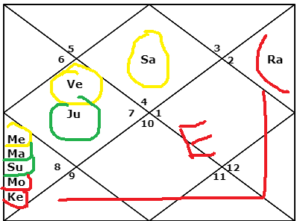 ASC Cancer 29-06-17 has Saturn [R]15-44-12 – Trouble due to retrograde Saturn and ASC Cancer makes him an emotionally strung person; unable to control his emotions with people younger to him, mostly due to his debilitated Moon in his 5th house, which gives him severe mental health issues and also due to his Venus being retrograde in the 4th house, hence his relation with women and his mother are strained despite him being outwardly charming, this as his Venus even though retrograde is in its lord house. He could also kill with his charm. Saturn retrograde in the lagna house with his debilitated Moon; makes him one who is unable to handle stress, loss, failure and rejection in his life and there would be rejections and obstacles in every sphere of his life; due to his multiple retrograde planets and KSD. He would be also hyper active and restless. Sometimes the killings could be committed, as he had nothing better to keep his disturbed mind and restless soul occupied with.

4th house of Libra has Jupiter 19-58-04 and Venus [R] 27-30-53 (Lord House) – Close to mother though again the relation had its ups and downs, failure in his personal relations, romance; he wanted to basically live off his girlfriends, retrograde Venus in the lord house being in his 4th houses means that he was raping/killing women for a long time before he got caught and mainly due to Jupiter, he was lucky and able to get away for long. Could have become a lawyer too; if other planets, external influences were supportive. When he wanted, he could be very charming; but underneath there was always trouble, due to his relationships or encounter with women. Women would cause him doom.

5th house of Scorpion has Sun 09-09-45, Moon 24-34-43 (Debilitated), Mars 20-16-28 (Lord House), Mercury [R] 01-21-35 and Ketu [R] 18-59-05 – 5 planets in the 5th house is what sustained him in his crime spree, which was done with planning, he was intelligent, could be polite and put on a good act and also could charm his way through a crowd, had a massive ego. Could get very angry and lash out emotionally and also be cruel when upset; which he would be a lot due to Moon debilitated in this house. So, what his debilitated Moon in this house at nearly 25 degrees does, is that it gives him emotional instability to control all aspects. Hence emotionally an uncontrollable person; who when upset would lose it. Had he been born in the 70s; then the systems in the US were in place; that would have landed him in a mental asylum; much early in his life for his and society’s good as his instability or absent EQ would have got him red flagged.

11th house of Taurus has Rahu [R] 18-59-05 – Last but not the least he had Kaal Sarpa Dosha (KSD); an astrological curse; in his chart. This as all houses after his 5th house Ketu (plus 4 planets including his Moon) were empty till his 11th house Rahu. Hence no family life, absence of luck, no profession, and no money and authority. Also, he would have been an attention seeking fellow but that would have made him infamous. He was best when under the spotlight, he starved for attention but that got him to the electric chair too.

Ketu for 7 Years from 23/10/53 till 23/10/60 – Confusing time spent just wandering around; as mentioned already, had he been born in the US of the 70s, would have been caught earlier. This is the time when his mental health issues were peaking, he would have come under the radar of the authorities and even been institutionalized.

VEN -20 Years 23/10/60 – 23/10/80 – Period of crime spree targeting young women. His retrograde Venus mahadasha for the 20 years was the time that he was hunting women, raping and killing them; due to them refusing to do his bidding – due to his retrograde Venus, KSD and debilitated Moon, he was emotionally undeveloped to take no for an answer and his multiple retrograde planets (Saturn, Venus, Mercury) made him unable to reconcile things peacefully and basically, he was a severely sick man out in the open. This is also the time when he got arrested but still managed to deny, deny, deny and try to throw wool over the cop’s eyes, but his time running out and after 1986; all his tricks would run out in his debilitated Moon mahadasha.

SUN -6 Years 23/10/80 – 23/10/86 – In a sickening way, was able to put on a good show as a self-representing lawyer, well dressed and charming women even while fighting multiple rape and homicide charges, in court; was sentenced to death during this time; as his 5th house had 5 planets including his debilitated Moon, it not only ruined him emotionally and made him sick but also adversely impacted all other planets in his 5th house, including Sun, marring his intelligence and which was used in the wrong way. Not to mentioned that he also married during this time on the death row and became a father, – talk about prison corruption.

MON -10 Years 23/10/86 – 23/10/96 – Time was quicky running out for him and this was one the worst times of his life; death hung over him and he would have no way been able to manipulate his way out, this time; as he did try, as best as possible to delay his execution; but 7 years into his debilitated Moon mahadasha; he was executed by the state.

Root cause for his crime spree is an emotionally unstable mind in his 5th house which also has 4 other planets, there by ruining their somewhat benefic impacts.

KSD also played a role in his disintegration.

Lagna House retrograde Saturn made his life tough and ASC Cancer made him emotional.

A lot of people with somewhat similar charts do not become serial rapists and / or killers, or do they? Are due to going unpunished by law enforcement in different jurisdictions of the world due to weak law enforcement? External influences and one’s immediate family does also have an astrological impact on a person and that may be a reason why some disturbed people rehabilitate, while most go out of control.

What is Jyotish Shastra? How can someone start learning it? Is there any YouTube channel that can teach it?