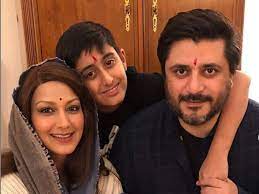 Sonali Bendre Behl is an Indian actress and model who has worked in Hindi films. She has also done modelling assignments and is married to film director Goldie Behl. In 2018, came the sad news that she was battling cancer and this was devastating to her loved ones and fans alike. Let us see what the future holds for her in terms of her health prognosis. 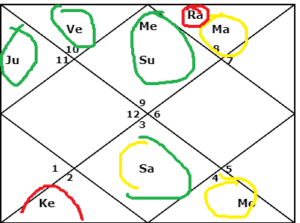 2nd house of Capricorn has Venus 00-01-04 – makes her attractive, enjoy her life and also would be in with the film industry, which would be a source of wealth for her. But Venus being weak also means her good looks could be impacted in the long run and there could be some stress in her marriage or from her partners. She would also have a short career in the film industry.

3rd house of Aquarius has Jupiter 19-49-53 – Auspicious house and means that her younger siblings and children would be very auspicious for her and would bring her happiness. She would be well educated, intelligent and also live in comfort and wealth.

6th house of Taurus has Ketu [R] 15-04-32 – Would be regarded as a nice person by one and all, but would be plagued by health issues which would come unannounced.

7th house of Gemini has Saturn [R]22-24-09 – Would do well in her marriage and her partner would also be in the same industry or could work with her or they both could meet via their common work friends or common work place. But as Saturn is retrograde, there is some stress in the relationship.

8th house of Cancer has Moon 27-13-03 (Lord House) – This is a huge cosmic save, as Moon is in its lord house. Though she would be mentally tough, Moon being in the 8th house means she could also get stress-related health issues. This is more so because her Saturn is also retrograde in her 7th house and she has to be very careful of her health, specially in her Moon mahadasha from 2011 to 2021. But if she takes care of her health; then things should be fine. From her cancer prognosis point of view, this means that she would suffer but would get timely and proper treatment. Though her looks, due to weak Venus, may suffer and that is to do with chemotherapy that makes the hair fall, etc. So suffering is there but she would have the courage to go through it with a smile.

12th house of Scorpion has Mars 21-32-49 (Lord House) and Rahu [R] 15-04-32 – Mars placement is a huge cosmic save. This is the life-defining house for her; more so presently. It would make her a nice human being, hardworking, be liked by people, good at working with people, courageous, very kind. However, Mars in the 12th house, even though it is in its lord house, makes her a manglik and this is also her present mahadasha. She has to be careful of her health, as even though Mars is well placed, in its lord house, it is in the 12 house and Rahu is also sitting there in the 12th house along with Mars. Her  next mahadasha from 2028 is that of Rahu, so I predict that this would be a tougher time for her; health wise, but if she gets proper medical care now, which she would, she would be able to soldier on till 2028. After that in her Rahu mahadasha, from 2028 till 2046, her health will decline. She always has to be careful because the 12th house means a lot of medical expenses in foreign lands too. It is also the house of moksha – so she will not be able to work and would be spending time taking care of her health.

Moon from 19/ 7/11 till 19/ 7/21 – This is a good time and she would be mentally strong and upbeat but health-wise she would have to take care. There would be a lot of internal stress built within her body and organs and she could have stress-related illnesses. The root cause of cancer in my humble opinion (though I’m not a medical doctor) is through the mind. Illnesses can either enter one through the mind or through on the mouth, so her cancer will be mostly through the mind. So stress will be the root cause and she has to be careful. She was also diagnosed with Cancer at the fag end of her Moon mahadasha in 2018.

Mars from 19/ 7/21 till 19/ 7/28 – Her 12th house Mars mahadasha has just started and again Mars is in its lord house. Hence she would be devoting more and more time to her health and devoting less and less time to career or earning money. She could be involved in pursuits of helping other people but she would also need to take care of herself; which she could do to in her lord house Mars mahadasha. But in the 12th house, she always has to be careful and this is more so as Rahu is in the same house as her Mars.

Rahu from 19/ 7/28 till 19/ 7/46 – Challenging time starts and she would suffer deterioration in her health during this time. Rahu is never good from her health prognosis point of view. Hence either during her present Mars or in the next Rahu, her health would suffer. Her Mars is lord house placed; but, as mentioned, it being in the 12th house and being with Rahu, also makes her time from 2021 tricky – more so from 2028 onwards.

What does future have in store for Russian President Putin?

Can the chart of Late CDS of India General Bipin Rawat be analysed? Does it have any indications of his sudden and tragic demise?