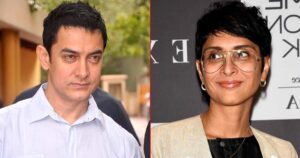 Aamir Khan is in the news again and this time it is not for his movies but his personal life after his 2nd marriage failed. What are the planets that are not letting this otherwise wealthy actor and superstar have a stable life? 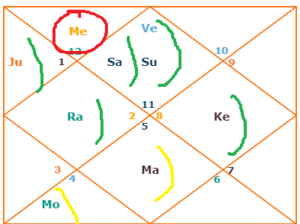 ASC Aquarius18-13-03 has Sun 29-52-31, Venus 22-29-07 and Saturn 16-06-56 (Lord House) – Extremely powerful and auspicious lagna house and would give him self drive, leadership, courage, make him bold. He would be extremely good looking and very popular with women. He would also by his own hard work excel in his profession which would be the source of immense wealth and material luxuries for him. He would also be adventurous and enjoy his life.

2nd house of Pisces has Mercury 15-29-43 (Debilitated) – This is a problematic house and shows loss of money, property and uncomfortable living arrangement. Hence, he would have drain of wealth and never be at peace.

3rd house of Aries has Jupiter 28-42-23 – Excellent for support from family, and he would have intelligent children who would be lucky for him and he would also be lucky in legal matters and his siblings who be auspicious for him.

4th house of Taurus has Rahu (R) 24-47-29 – Mother would dominate him and all the landed property that he would have would be in the name of mother and she would be the source of his strength. He also has Very Mild Kaal Sarpa Dosha (VMKSD)in his chart as all the houses between his Rahu and Ketu are empty except his 6th house Moon and 7th house Mars are empty and hence his married life would always be a work in progress and unstable due to his emotional in-compatibility with most people.

6th house of Cancer has Moon 13-29-42 (Lord House) – This is a double-edged placement for him as while it makes him emotionally strong and mentally rugged but also makes him headstrong and take on people who have upset it, no matter what the costs. He would not be close to many people. This placement takes prominence right now as presently he is undergoing his Moon mahadasha, infact it just started 2 years back and his 2nd marriage failed.

7th house of Leo has Mars (R) 23-36-05 – Makes him a manglik and his married life would be full of ups and downs and there would never be peace of mind that he experiences via his marriages, he would be the argumentative sort and have multiple marriages.

10th house of Scorpion has Ketu (R) 24-47-29 – He would be wealthy and very lucky yet he would also be indifferent to money and not care much about it or money would not be the driving factor in his life. He could lose a lot of money in his life if he is not careful. Infact he could be bankrupted by these multiple marriages.

Moon from 22/ 9/19 to 22/ 9/29 – This is time when due to his 6th house Moon he would not be getting along with his loved ones and additionally his 7th house Mars always makes his married life unstable or uncertain and he also has VMKSD and his Moon/Mars is between his Rahu and Ketu and hence he is not able to maintain his personal life especially right now in his Moon mahadasha. His debilitated Mercury makes him prone to loss of wealth is not careful.

There are multiple reasons as to why his marriages fall apart

His strength is lagna house and that would ensure that he always has the courage and fortitude for financial success via his hard work; would be bold person and also do well in the film world, courtesy his looks.

But he would lose a lot of money n his life and could even go bankrupt if he is not careful as the time ahead is tricky for him on the personal front..