‘Big Bull’ Harshad Mehta ruled the Indian stock markets in the late 1980s and early 1990s. Trading acumen, speculation, fraud – all three played a role in the wealth he generated for himself and stock market punters across the country. He flew high, amassing millions in a short span of time and lived it up with a flashy lifestyle. But it all came crashing down when the fraud of Rs 4,000 crore unraveled when he could not repay banks. Stock market scams had existed before him in India, but not
on this scale. So what planets drove Harshad Mehta and his rise and fall? 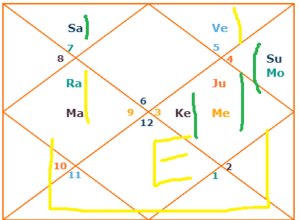 ASC Virgo 06-22-33 – Aggressive, go-getter and intelligent
2nd house of Libra has Saturn 09-50-13 (Exalted) – Excellent for wealth, both from family and also from own earning and profession. It also leads to shrewdness in professional matters.

4th house of Sagittarius has Mars [R] 02-21-19 and Rahu [R] 20-26-42 – Excellent, but there is a Mangal dosha. While this is very good for wealth and possessions, landed property and influence, all this could be taken away due to retrograde Mars and Mangal dosha.

10th house of Gemini has Mercury 22-44-37 (Lord House), Jupiter 21-31-44 (Enemy) and Ketu [R] 20-26-42 – Wealthy, life of sophistication and luxury, soft-spoken temperament, would be blessed by intelligent children who would also do well but he would not be able to take part in their happiness. Would be troubled by legal issues. Also, if not careful, could have losses to wealth.

12th house of Leo has Venus 24-47-26 (Enemy) – Trouble due to women, spouse and material enjoyments. If not controlled, could land him in jail or leave him without any work (forced retirement).

Hence, his Sun and Moon, which would have given him name and fame, instead gave him infamy and legal trouble due to overconfidence and not being able to see trouble head on.

But in his 10th house Ketu mahadasha, from 26/ 9/90 till 26/ 9/97, things started to disintegrate from the financial angle. Specially during his KET-VEN (1992) period, his fraud was exposed by the media. After that it was just a downward spiral for the rest of his Ketu period, though it could have been contained.

He passed away due to a combination of his Venus, Manga Dosha and mild Kaal Sarpa Dosha. Because of these, there was no
peace in his life and this took its toll on him.

It looks to me that he would have also been suffering from personal problems that, combined with his legal issues and jail, etc., had an adverse impact.

If he had come to me in 1990, at the start of his Ketu mahadasha, I would have told him to be cautious of money matters and make sure all the ‘Is’ were dotted and ‘Ts’ crossed.

If he would have come to me in 1997 just before the start of his Venus mahadasha , I would have told him that if he wanted to survive the legal and personal mess, he should give up everything and settle matters and retire. But that is one big IF!

Do we have fortune tellers in the likes of Marie Anne Lenormand who made uncanny accurate predictions?

Can the chart of troubled Rhea Chakraborty be analyzed?