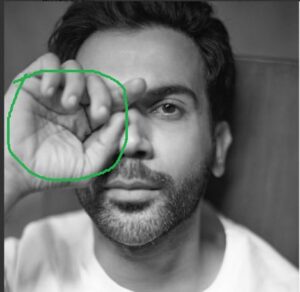 Rajkummar Rao (born Raj Kumar Yadav; 31 August 1984), 37, is an Indian actor known for his work in Hindi films. He is the recipient of several awards, including a National Film Award, three Filmfare Awards, and an Asia Pacific Screen Award. Rao graduated from the University of Delhi and he learnt acting at the Film and Television Institute of India. He then moved to Mumbai and made his film debut with Dibakar Banerjee’s found footage anthology film Love Sex Aur Dhokha (2010). Rao got married to his lady love Patralekha Paul on 15 November 2021. Source – https://en.wikipedia.org/wiki/Rajkummar_Rao

ASC Aquarius 11-01-48 – Excellent placement and makes him fun loving, adventurous and practical by temperament, though he must not take too many risks specially in his personal or married life due to his MKSD.

4th house of Taurus has Rahu [R] 07-59-25 – Excellent though has Mild Kaal Sarpa Dosha (MKSD); would make him wealthy and he would have landed property, conveyances and also have very good relation with his parents, who would be auspicious for him; too many risks in his personal life should be avoided.

7th house of Leo has Sun 14-39-49 (Lord House) and Mercury [R] 09-16-40 – Very Good, though Mercury retrograde, makes him a courageous person who would not tolerate mediocre people and their work and would strive for excellence, makes him very intelligent but when he gets angry, he would not hold back and give a nasty tongue lashing and this could create problems in his married life; which would be delayed due to this placement and due to his debilitated Venus also; but nonetheless due to Sun being in its lord house being his 7th house, he would have no shortage of admirers or female admirers. He has to be careful of rough edges around his personality.

8th house of Virgo has Venus 05-33-06 (Debilitated) – Challenging; this is a very challenging placement and makes him average looking and one who is not your typical chocolate boy; good looking hero material and he would have to work the hard way through his craft and through the auspices of his 9th 10th and 11th houses as well as exalted Saturn, to overcome the handicap of his mediocre looks by excelling in his craft. This placement also plays a vital role, as due to it, he would have trouble in his married life, if he’s not careful and this despite his best efforts; though he has 7th house lord Sun; but Mercury retrograde and Venus debilitated do not bode well for his married life and he has to be very careful and I hope he has got married by careful chart matching as otherwise there is trouble to his married life and his health.

9th house of Libra has Moon 20-27-21 and Saturn 17-59-05 (Exalted) – Excellent and would make him very lucky in his career, which would be the source of wealth and also he would be very lucky as his mother would be auspicious for him; he would be blessed with a very stable and strong mind and mentally he would be very strong and he would use his strong mind and intelligence;  that is his strong EQ and IQ to benefit in his career and life; he would get stability in his career and life due to his stable nature and hence despite his debilitated Venus; his exalted Saturn and Moon in this house make it possible for him to succeed in the film line, but as a character artist par excellence and gradually bag leading roles.

10th house of Scorpion has Mars 14-02-47 (Lord House) and Ketu [R] 07-59-25 – Very Good placement and this is what makes him popular with ladies and also very wealthy; though he would not care much about wealth. Mars in its lord house makes him very polite and a humble team player, who takes people along with him and one who does not care about spending his money and that off course makes him popular with his friends. This placement also gives him power and authority via his profession and makes him tactful.

11th house of Sagittarius has Jupiter 09-31-05 (Lord House) – Excellent, and as if having two planets in their lord houses and one exalted was not enough; Jupiter is also placed in its lord house; that is his 11th house. This is the house of name, fame, luck, education. healthy children, and anything he touches would be turned into gold. He would be very very lucky, he would be very very famous, he would be educated, knowledgeable and also would travel the world in a jet set life and would have authority power and influence. He would be world famous person. This can be verified by his palm picture (inset).

MER – KET till 9/ 7/22 – This is a confusing time for him and I hope he has done the remedies for his Mercury as otherwise in his present Mercury mahadasha; he could be facing some rough weather on the marriage front. It could be some time before, the news starts percolating in the gossip circles of btown, but there could be trouble pretty quickly.

Having retrograde Mercury and debilitated Venus in 7th and 8th house would create trouble in his married life, his married life could be delayed, they could be separation or even divorce, he would also not be blessed with chocolate hero good looks, but with rugged and crude looks, though given his 9th, 10th and 11th house planets and also his excellent Sun, Moon and Mars, would make him excellent in his craft and also his excellent soul, mind and heart would shine through his eyes giving him a good aura.

Plus, he would be an absolute professional at whatever he does, due to his excellent 9th 10th and 11th houses. Luck, wealth and fame would be at his feet.

He has to be very careful of his marriage matters also his MKSD makes him prone to taking too much risk with regards to his personal life. He is destinies child.

If you want me to match his chart with his wife, Patralekha, please let me know.

Will the stars help Biden-Harris unite a divided United States?