As per Vedic astrology Jupiter or Guru is the planet directly connected with your children or the generation next. People with excellently placed Jupiter often have children who are the source of great joy for them, while people with Jupiter placed in their 6th, 8th or 12th houses or Jupiter debilitated, retrograde or in an enemy position can have severe progeny issues, including delay, difficulty or inability to bear a healthy child.

People with Jupiter in its lord house of Pisces or exalted in Cancer get immense happiness via their children who become to be the source of their strength and wealth and fortune. As soon as such a child is born the parents life changes for the good. While the opposite is also true, people is Jupiter debilitated in Capricorn or Jupiter in their 6th, 8th, and 12th house have trouble conceiving. This impact is more pronounced when Jupiter is in the 8th house as that indicated ill luck as well as some medical issues due to which the person cannot be blessed with a child, sometimes even if the Jupiter is of good quality, but it being placed in the 8th house could make the native uninterested in having a child, either not have children or have children who have sever medical issues or become the source of misfortune.

There could be hundreds of permutations or combinations of Jupiter and/or  the 5th house as well and hence, as is the case in astrology, it is always good to explain this with case studies as every chart if different and has to be analysed in detail.

Case Study 1 – Case of no child 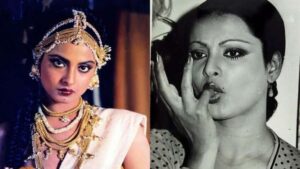 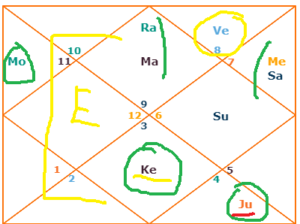 8th house of Cancer has Jupiter 04-28-03 (Exalted) – Tough for next generation (children) matters. 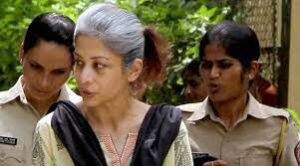 Case Study 2 – Extreme case of trouble or enmity with children 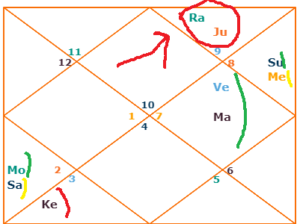 6th house of Gemini has Ketu [R] 25-52-27 – Would have hidden enemies working against her interest all the time behind her back and would cause her health issues.

10th house of Libra has Mars 10-42-00 and Venus 03-38-38 (Lord House) – This is the house of money and though she would have the propensity of taking people along with her but Venus would make her have multiple relationships and live a life of luxury and wealth but use her relationships for financial gains. She would be an ace at manipulating her romantic partners and would have a handful of them ever to help her.

11th house of Scorpion has Sun 06-31-40 and Mercury [R] 15-35-05 – This would make her bold and have leadership ability but she would use it to her disadvantage and also gain infamy due to it. Also due to her Mercury she would become infamous and live most of her life in extremely uncomfortable circumstances and in lots of difficulties (life prison) and would gain notoriety due to it.

12th house of Sagittarius has Jupiter 15-32-09 (Lord House) and Rahu [R] 25-52-27 – Again a decisive and critical house that played a major part in her downfall as she took all wrong minded decisions due to her over confidence and it was related to foreign people and foreign lands. Additionally, the nail on her karmic coffin was the 12th house Jupiter due to which bad luck, legal conflicts with her children were the reason for her miseries. She manipulated them and took wrong minded decisions which would come to hound and write her off from leading a normal life.

Note – Simliar is impact of Jupiter on men.