Before I show you the same via a case study, I must warn you all to NOT indulge in self-astrology or self-palmistry.

Subtle change in ones palm with refence to ones circumstances and / or karma and the corresponding chart is an area that I have devoted by life to as it has always intrigued me.

Below is a sample of the palm of a person belonging to a very wealthy family. However, due to a debilitated Saturn in the 2nd house along with Venus, and Saturn mahadasha coming in the prime of life, his life was nearly destroyed.  This is what the palm looked like when I saw it for the first time. The person was poor and on the streets and was disowned by his family.  The palm depicted the person going through deep depression and losing interest in life. If immediate interventive action was not taken, then very soon the emotional trauma would start manifesting itself by way of crippling physical problems (blood disorder, heart attack, stroke, cancer, etc.). 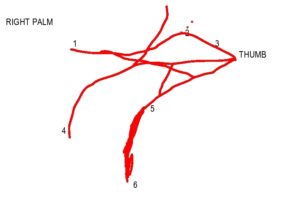 I immediately told the person to cut access to astrologers or palmists as there would be only bad news on that front. I also told the person to seek immediate medical help for the severe emotional distress or deep depression that I could see. I also cautioned the person to avoid any romantic liaisons as taking care of health by exercising, and doing yoga and meditation was a must.  For the debilitated Saturn in the 2nd house, I told him to start chanting the Hanuman Chalisa and also visiting the local shani temple every Saturday. There was nothing more that I could do as predictions is the easy part, the tough part is doing the remedies as sometimes they involve turnings ones life around 180 degrees which is very challenging.

I met him after a decade and he looked much better on all fronts and I immediately saw his palm and chart. This is what his palm looked like now. 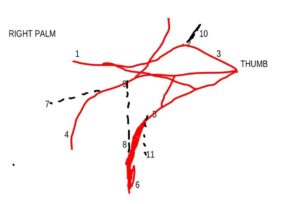 By now the debilitated Saturn mahadasha was over and a well-placed Mercury mahadasha had started.  He was in a 8-plus years old marriage and with a child. Reconciliation with the family had happened and he was employed as a small time reporter with a local daily. Also, he was on a minimum maintenance dosage for his depression/anxiety.

His palm also showed some positive changes and I believe they would get better with time.