To an avid news watcher like me, Rohit Sardana was a familiar face on television. Questioning, probing, debating as he presented the day’s top stories. Agree or disagree with him, it was clear he was a consummate journalist who lived and breathed news. His untimely demise came as a great shock to many, a reminder of the cruelty with which Covid has swept through our country. 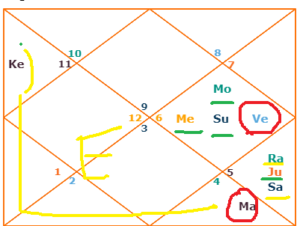 ASC Sagittarius 09-08-37 – Practical, and a people’s person. But was the worrying sort.

8th house of Cancer has Mars 04-53-15 (Debilitated) – Argumentative to the cost of his health and well-being. He was good at hiding his inner feelings, which would cause him lifestyle-related health issues. Also gives him mangal dosha.

9th house of Leo has Jupiter 04-58-60, Saturn 25-10-01(Enemy) and Rahu [R] 13-39-07 – Excellent for profession and would be lucky, would have healthy children and be well-educated. He would have lots of stress from profession but would take it and keep on working. There would be an unexpected boost in his career but that would be determinantal to his well-being. This house also becomes tricky since it has Rahu. Though Rahu is well-placed, it also caused him to have mild Kaal Sarpa Dosha(mKSD) and make him a workaholic (at the cost of everything).

10th house of Virgo has Sun 05-09-38, Moon 15-17-33, Mercury 12-38-17 (Exalted) and Venus 12-41-48 (Debilitated) – Wealth, fame and recognition, but controversies too. Would live in luxury and earn a lot of money. He would be polite with people and be sophisticated in his style and also have immense mental strength and leadership qualities and would belong to a very good family, would be auspicious for parents and close to them. However, the debilitated Venus in this house makes him one who would not have the happiness of a domestic life and one who not care much about his health. Would be very helpful to society and all around him due to his exalted Mercury.

Dashas at time of passing

There is no indication that he would pass away when he did but there are warning signs in the chart around his health. This is because he has a disbalance in his lagna chart with all houses between his 3rd house Ketu and 9th house Rahu empty. This is further amplified by his debilitated Mars lying in his 8th house in between the two. This would lead to health issues due to a fast lifestyle. It needs to be noted that Rahu and Ketu bring sudden events – in this case, his tragic passing.

He was a workaholic and the focus of his life was his career.

Right now, he was going through an upswing in his career with luck favouring him since the start of his Jupiter in 2010, there was happiness from the birth of his children and due to them too. But at the same time, the mild Kaal Sarpa Dosha, mangal dosha along with debilitated Mars and Venus (with the Mars being in the 8th house in between his Rahu and Ketu) made him succumb to sudden and unexpected illness. But there would always have been lifestyle-related health warnings which he like many other young and upwardly mobile people tend to ignore.

By nature, he was an argumentative person at the cost of his health due to Mars in his 8th house. But there was some cosmic coverage due to his exalted Mercury being in his 10th house. That gave him sophistication and he was able to manage his relationships.

His present Jupiter was in the same house as his Rahu and Saturn and hence there would have been a lot of pressure and stress related to his work that his system was unable to bear. Off course the mKSD, mangal dosha and his debilitated planets all contributed but this is a death I could not have predicted like so many other deaths.