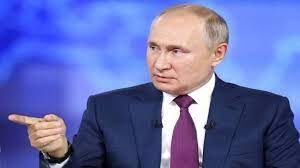 The chart of Putin becomes very powerful because his lagna house is pristine. Libra ascendant with Venus is sitting there; hence, he would always be a balanced and thoughtful person. He would be a master strategist and would have the tendency to enjoy his life king size with all the material enjoyments that money can buy. He would be very popular with ladies and travel all over the world. He would be very close to his immediate family – that is his children, parents, and siblings. He would have a soft spot for them. He would be very private about his family matters and that would be totally off the table for all. This includes his ex-wives, wives, mistresses, or girlfriends since his Jupiter is retrograde in the 7th house. So that tells me that he could have more than one marriage, he could have legal trouble on a world level and on a personal level also – but he would be very private about all these matters. This is also because of his lagna, 2nd and 4th houses. He would also be very wealthy. In fact wealth would not be a factor for him; he would not be money-minded or greedy. But that having been said, he has some planets that are very tricky in nature and can give him a very complicated temperament or make him a very complex person to understand.

His Moon is exalted. An exalted Moon is always very good; it shows supreme confidence. In fact, sometimes it can lead to overconfidence also and it also is very good for enjoyments in one’s life. When one has an exalted Moon, that planet by itself leads to the person doing well in his life despite all other planets. But it is in the 8th house. So, what that means is he can be very sensitive also and when he is pushed beyond the limit, his overconfidence can give way to anger and rage in which he would throw all sorts of practicalities out of the window. 10th house Ketu once again reinforces that though he would have money, he is not so much concerned about money or is not such a money minded person. I do not think that beyond the normal limits of what everybody is, Putin is not a corrupt person personally. Yes, he is wealthy, but I do not think that making money is his prime objective in life.

Let us come to one of the most defining houses in his charts which has caused him to do much good and much damage to himself, to his loved ones and also to his countrymen. That is his 12th house – it has Saturn, Sun and Mercury exalted in this house. This means that he was born in a very normal family, he had to struggle, work hard all his life, and come up the hard way. Saturn means he would have worked very hard all his life and for most of his life professionally that is in terms of getting your salary/increments, he would have worked beyond the requirement of the job and at the cost of his life and family. He would have been very frustrated and his career would not have been satisfying from the point of view of promotions, he would far away from his place of birth; but he would not have been happy or he would not have risen to the level that he wanted to. This is while he was playing by the rules. He is the sort of sort of person who would not like to play by the rules for long, the conventional job rules, that everybody in a work place or even in a business follow. He would have given much more, in fact his whole life, for the sake of what he believes for or for the sake of his karma but it would not give him the recognition and the respect that he yearns for. In fact, it would be a very controversial professional career, if I may call it that. A career that he may have and he could die on the job.

He would have died long ago on the job but for Mercury exalted in this same house. This means that despite everything, he has the charm or you could call a fatal charm – that would draw people to him. He would be very sophisticated with words when he wants to; but when his anger overtakes him, then there is no logic and most of it is thrown out of the window. He would live a life of luxury, so as I said this is not the chart of a king, it is a chart of a person who would live life king size.

His basic temperament is that of being very cautious and also liking his material enjoyments. But when pushed, he can go ballistic; his anger is very dangerous and though he would try to make sure that he and his loved ones’ safety is taken care of; he can take actions which would be very dangerous for him and also for the rest of the world due to the position that he occupies presently. So this is the chart of a man who would not listen to anybody; he does not like listening to anybody and this is more so as for the past 18 plus years and till the end of 2022 as he is going through his Saturn mahadasha which is in the 12th house. So he is not making professional friends or he is not doing things which are getting him friends right now. If provoked beyond a certain point he could go down, but the chances are very high but he would take everybody down with him. He is in self-sacrifice mode. So, till December 2022; the chances of him indulging in a nuclear war or something very reckless are very high. From this chart, he will not survive; but he will make sure that the others also don’t survive.

Now after this period –his 12th house exalted Mercury mahadasha starts. So the people who are negotiating with him, need to realise that he is on a suicide mission till December 2022. This is as his next mahadasha is about to start after December 2022; if they assured him that his and his loved one safety would be assured, then he could also calm down. As long as his enjoyments in life are assured, then he could go to his practical self and compromise. But as part of that compromise, he would have to be given some post, maybe that post does not have too much power in the real sense; but something would have been would need to be given to him. But that is 2023 onwards. Right now, this whole year he is going through one of the toughest times in his life and he is taking the wrong decisions. Hence, if he is pushed, he could get more reckless.