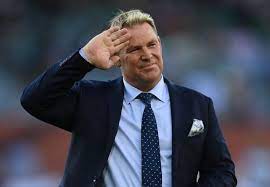 Australian cricketer Shane Warne died all of a sudden of a heart attack at a resort in Thailand. The wizard of spin was one of the finest right-arm leg-break bowlers in the world. He made spin bowling cool.

This is an homage to him for the fun times he gave me and cricket fans across the world – both on the field and off it. 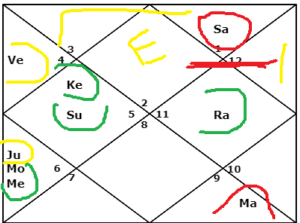 3rd house of Cancer has Venus 23-55-06 (Enemy) – He will have a tricky relation with his spouse or girlfriend and his siblings. Chances of multiple marriages or multiple liaisons are very high; more so given his Jupiter being enemy-positioned and the 7th house being empty. He has very mild Kaal Sarpa Dosha (VMKSD). He would do well in sports, would be good looking and have the propensity of enjoying life – sometimes too much.

4th house of Leo has Sun 26-16-40 (Lord House) and Ketu [R] 27-41-30 – Excellent; gave him leadership skills, courage, landed property, wealth, and life of luxury. But it also made him do things where he would waste money. He would not be serious about money and would spend it without much thought.

5th of Virgo has Moon 06-00-54; Mercury 20-41-34 (Exalted) and Jupiter 17-10-08 (Enemy) – This is an excellent house for him. He has mental strength; he would be calm and composed by nature. He would live a life of luxury, would be soft-spoken and sophisticated despite his wild outer self. He would be popular among friends. He would be father to healthy children. There could be some legal problems, and his children could be living away from him due to marital problems.

8th house of Sagittarius has Mars 01-26-35 – This is a troubling placement for him and makes him angry. When he gets angry, he explodes in anger and lands in controversy. This will also give him stress and related health issues; more so, lifestyle-related health issues such as blood pressure, sugar, diabetes, and heart issues if not taken care of. A debilitated Saturn is never good from the health point of view, and a debilitated Saturn in the 12th house is never positive.

10th house of Aquarius has Rahu [R] 27-41-30 – Lot of money. There is overseas travel, power and authority, professional success, and rewards. There will be scandals too as he would enjoy his profession and would be fun-loving. That could land him in trouble or controversy sometimes but he would be able to manoeuvre through it. He also has VMKSD. When read with his Mars and Saturn, this is also not good from the stress point of view. It means sudden health issues. Apparently, that is what happened.

12th house of Aries has Saturn [R] 15-05-41 – This is not a good house. Despite being a good sportsman, professionally he would not achieve what he could have. He would not get the amount of long-term success that, say, another equally talented but level-headed player would have. This is because of his Saturn. Saturn debilitated and retrograde in the 12th house means one’s career is cut short suddenly. He passed away in his present Jupiter-Rahu antardasha, with Jupiter enemy-positioned in his 3rd house and Rahu in his 10th house with VMKSD. His death was just three months before the start of his debilitated Saturn mahadasha in which he would have suffered health issues. Had he lived, he would have not been able to work due to health issues, and would have been forced to take retirement.

I think since he was a nice soul. He went away before the start of one of the worst times in his life. If he had lived in the Saturn mahadasha (starting June 2022; he passed away in March 2022), it would have been 19 years of hell for him.

Of course, his debilitated Saturn, Mars, Rahu, and VMKSD created the perfect storm with regard to health problems. I would have warned Warne regarding this had I seen his chart earlier. I read in the newspapers that he was planning to go on a diet or planning to reduce but that is what happens with debilitated Saturn – you make plans but they never come true.

JUP – RAH till 29/ 6/22 – This was the antardasha at the time of his passing. Jupiter was enemy-positioned in the third house, Rahu was in the 10th house and Rahu was inflicted by a VMKSD. But the thing to note is that after his Jupiter mahadasha, his debilitated Saturn mahadasha would have started. This would have been 19 years of retirement, either forced retirement or not being able to work. It indicated something drastic happening related to his profession due to health. He passed away just before his Saturn mahadasha.

SAT mahadasha for 19 Years from 29/ 6/22 till 29/ 6/41 – He did not live to see his debilitated Saturn mahadasha. This would have been a terrible time and he would not have been able to function. He would have to take forced retirement. Given his age and Mars in the 8th house plus Rahu with VMKSD, it would have been devastating. I would say God granted him a place in heaven by taking away this nice soul. He was born to enjoy his life, which he did, and then went away.

His excellent 5th and 4th houses as well as auspicious lagna house are what gave us the world-class spinner, Shane Warne. A friend’s friend, a fearless leader, mentally strong, devoted to his children. Though had scandals in his personal and professional life but would have made a good amount of money, his debilitated Saturn (whose mahadasha was about to start), Mars, Rahu, and VMKSD –all ensured he was taken away just before the start of one of the worst times in his life. May his soul rest in peace.

What are the astrological combinations to become a successful YouTuber?

Can the birth chart of Microsoft founder Bill Gates be analyzed?