Sure there are excellent Occultist even now though you have to try them. You must understand that not every good fortune teller has fame in their destiny. Though I have never heard of Marie Anne but since you have been kind enough to provide me with her Wiki page and hence her birth details (except the time) let me take a quick look at her chart. 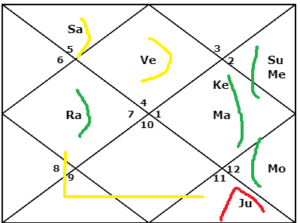 8th house of Aquarius has Jupiter 10-58-39 -Jupiter is in Aquarius which is a neutral sign. Jupiter is lord of 6th and 9th houses and situated in 8th House. Jupiter fully aspects 12th, 2nd and 4th houses. Jupiter is aspected by Saturn and Rahu.

9th house of Pisces has Moon 18-48-47 – Moon is in Pisces which is a Neutral sign. Moon is lord of 11th house and situated in 9th house. Moon fully aspects 3rd House .

Interpretation of the chart

Interpretation of the chart

As you can see there is fame in the chart with Venus in its lord house but being in an enemy position and hence she would have tried her hand in acting and live a life of luxury but she would have generally been unsuccessful in acting and also there is a lot of suffering in a chart and due to that she moved onto what she was naturally good at that fortune telling or the occult sciences. Also being an ASC Cancer meant that she was very sensitive had strong feelers and basically such people have a God given gift of strong sixth sense. Saturn in the second house means that not much support from parents or family and she would have with great difficulty tried to make a life of her own with her own hard work; she would have made good amount of money but she was also very indifferent to wealth. Her 4th house Rahu means that by her own hard work and ability she would have amassed a good amount of landed property; would have lived comfortably and this was this was a notable placement in her chart at as it was at the peak of her life that she passed away in her Rahu-Saturn. That is when she was doing very well and had a good name for herself. It is to be noted that Jupiter in the eight house is never good and does not give one formal education and also the happiness of a family life as well as having children and it also means a controversial life and though she would have been in an occultist or a fortune teller, but life would have been tough for her and she would have worked very hard but as her next houses tell us that she was at the end of the day lucky too. I had mentioned that there are many good fortune tellers or cultists in this world but not everybody gets fame and fortune and that is what is there in her chart, if you see her 9th 10th and 11th houses. They auspiciously populated, so she was very lucky; whatever she touched, turned into gold due to her 10th house and at the same time she was indifferent to wealth and would have given a lot of it away and would not would not have bothered much about it. Her 11th house tells me that name and fame was at her feet and she would have reached the heights of it and she was fearless and also lived a life of comfort right till the end due to her own hard work.

So in in ending I would say that this is the chart of a well-known and lucky fortune teller who had name and fame and knew the rich and powerful but had no personal life.

Why did the marriage of IAS toppers and power couple Tina Dabi and Athar Khan fail?