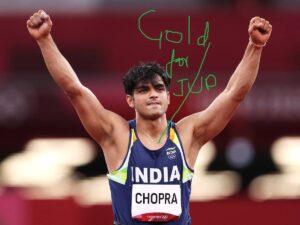 Subedar Neeraj Chopra VSM has created history on Saturday, August 7th 2021, by winning the gold medal in men’s javelin throw and the nation has erupted in celebration.

What makes him tick? What does Neeraj teach us? To focus on our work regardless of the distraction. So as a tribute to his achievement, let me do his chart analysis.  It was a Saturday and for this karma yogi, it turned out to change his life as well as the destiny of his country men and women. Let me see what role ‘shani maharaj’ has in his life! 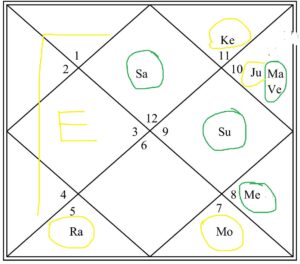 6th house of Leo has Rahu [R] 20-18-13 – Has a rebellious streak in him which can bring out the best in him but also make others jealous of him. Has to be careful. He has to be careful as there could be sudden success and failures in his life and he would have to work very hard for success, which he would.

8th house of Libra has Moon 04-20-43 – Emotionally sensitive person and can take up challenges and achieve anything when challenged and also a sympathetic person and this can also lead him to be betrayed by people. This placement resulted in him living a tough life and being sensitive person.

9th house of Scorpion has Mercury [R] 24-06-44 – Would travel a lot and live out of suitcases and achieve a lot in his life due to his single-minded devotion and clean intentions, given his lagna house Saturn and ASC Pisces. But he would also have a rustic self, typical son of he soil, who would work hard all his life and live in discomfort. Though he would achieve a lot in his profession but a lot of toil would be required.

10th house of Sagittarius has Sun 08-39-52 – Excellent soul and courage, leadership skills par excellence and a good human being, would make him wealthy and a no non-sense person. A great leader.

11th house of Capricorn has Mars 10-52-54 (exalted), Jupiter 26-53-40 (debilitated) and Venus 09-59-46 – Life defining house would give him fame and dejection, his exalted Mars would give him courage when needed and he would be an excellent team player who would get along and be liked and become well known and famous due to his achievements, he would be good looking and conscious of his looks and girls would be crazy about him and he could be making a name and money along with fame for himself via the show business/films/advertisements; his debilitated Jupiter though is a spoiler and he has to be careful in matters of his heart as he could get into legal trouble and also health issues due to this, this is more so as right now he is having his debilitated Jupiter mahadasha ,which has just started and in his JUP-SAT period he has won the Olympic gold but this could bring some controversy too, if he does not handle himself carefully. He has to do the remedies for his Jupiter and it is clear that while throwing at the Olympics he was wearing a thick gold chain and that is a good remedy for his Jupiter but more could be needed.

12th house of Aquarius has Ketu [R] 20-18-13 – Loss and disinterest in foreign lands and also would believe in God and astrology and palmistry and would be a spiritually inclined person.

JUP – SAT till 13/11/21 – His debilitated Jupiter mahadasha makes this time tricky for him as there could be some loss in reputation for him despite the fame that his 11th house exalted Mars and Venus get him, he is required to control his enjoyments as otherwise the chances of him getting distracted and on the wrong path and get a bad name are always there.

Neeraj has a good chart and he would be hardworking and also lucky but is going through his Jupiter mahadasha and though his Jupiter is placed in his 11th house of name and fame and it is also in the same house as his exalted Mars and Venus and hence its negative impact is greatly reduced but he always has to be careful of controversies and also regarding his marriage. He is wearing a gold chain as can be seen in the picture and this would help him against his debilitated Jupiter.

I would advise Neeraj to be careful and not let success get to his head and focus on his training as there are chances of him getting distracted. Long terms the chart is good as his next Saturn mahadasha would be one of the best times in his life.

He also has Mild Kaal Sarpa Dosha and this would make him a workaholic at the cost of his personal life.

Confirmed birth time of Neeraj not available but as long as he is born on December 24th, 1997 in Panipat Haryana; he would have Jupiter debilitated and its mahadasha right now.