There has to be a strong celestial hand behind Rajiv Hariom Bhatia a struggling chef and martial arts expert becoming on of India’s top celebrities Akshay Kumar.

Let us take a look at his chart. 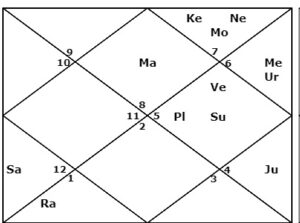 Dasha periods in his life and its interpretation.

What are the astrological combinations to become a successful YouTuber?