This is a wonderful question and I will discuss the birth chart of my mother as a case study.

My mother has been the epitome of strength and her love for me and my sister is boundless. I can say based on my experience that if there is anything that we siblings can take granted in this otherwise cruel and selfish world, it is our mother’s love, it is unconditional.

She also has an excellent chart, as you would see. She is presently 78 years old, in the best of health; even tough is a recent breast cancer survivor. She has had no other health problems; I have never seen her take any medicine in her complete life till date, except during the treatment for Cancer.

Her and my father do brisk walking every day for 1 hour, as far as my memory goes – that is the only exercise they do. She got married to my father in 1967 and they have just completed 55 years of togetherness. She is a retired mathematics school teacher, having taught in Kolkata and then in Delhi. She is an MA (Mathematics, Economics) from Delhi university (Miranda House) and B.Ed. from Kolkata university. She belongs to an army family (father, brothers).

The best part about her is that; it is not that she has not been through testing times; she has had her fair share, but I have never seen a flicker or an iota of fear or doubt or negativity in her ever in my life. She is an optimist.

My father in his days used to consult all sorts of astrologers/palmists and was an amateur astrologer himself and I remember when I was very young; I accidentally read an astrological report of my father in which it was written that his wife would die very early. This was in the very early 80s. I had gotten concerned on reading it and I asked my mother about her predicted short life span, as I felt insecure and enquired; what would I do if she died so soon; how will I live. She just brushed it all aside strongly and we never discussed it again. I have since realized that she is least bothered about herself and nothing effects her except the well being of her children and husband. She is the rock that has kept our family strong and together. I am lucky to have such a mother who was not only a full time homemaker but also a full time teacher. Off course now she has happily retried from both the duties having done her part and devotes her time to prayers. 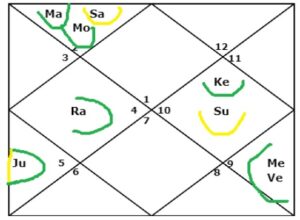 ASC Aries 07-38-05 – Excellent, makes her active, loyal and dependable. Makes dharma aspect predominance and hence a devout believer in God and conscious of self duty.

2nd house of Taurus has Mars 15-19-28, Moon 26-01-48 (Exalted) and Saturn [R] 26-50-06 – Excellent though Saturn retrograde but in an auspicious house and Moon exalted, also a non manglik. Close to family, which would be the source of her happiness, also support from family immense. Some worry also seen due to family.

5th house of Leo has Jupiter [R] 00-01-38 – Trouble having children, there was a miscarriage before my birth, rest my fathers chart also plays a role in progeny matters but retrograde and a weak Jupiter in the 5th house is a huge cosmic save as the 5th house one of the luckiest houses after the lagna house.

9th house of Sagittarius has Mercury 26-21-05 and Venus 15-34-30 – Extremely lucky and would do well in her profession and also would be having a happy married and domestic life, live in luxury, be sophisticated and have fine manners.

10th house of Capricorn has Sun (Enemy) and Ketu [R] 13-17-51 – Not much professional authority and also not money minded, can get upset and angry but it would be a controlled one due to exalted Moon in the 2nd house.

A positive person and an eternal optimist as there are no planets in evil houses.

Extremely lucky due to exalted Moon in the 2nd house and 9th house plants which board well for wealth, mental strength and peace of mind.

Is Kaal Sarpa Dosha a Dosha or a Yoga? What is your take on the issue which has always been a source of disagreement between astrologers?