Chart vs palm of Swami Vivekanandaji

A) Palm of Swamiji 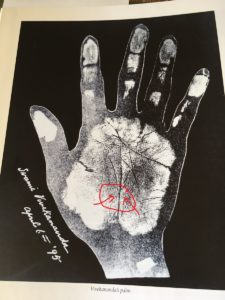 Above is a palm photo of Swami Vivekanandaji (12 January 1863 – 4 July 1902) taken on April 6, 1895, around seven years before him attaining moksha /liberation at the age of 39 years and in his Jupiter mahadasha. 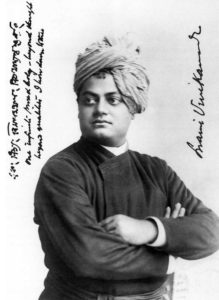 B) Lagna Chart of Swamiji 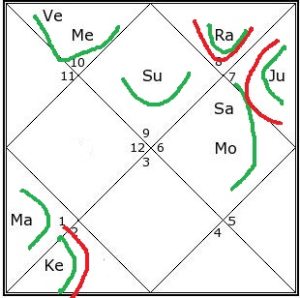 ASC Sagittarius 28-38-57 has Sun 29-26-26 – Excellent for courage intelligence and leadership. I wish for more people with excellent sun in their charts to be able to come forward in the civilian sphere and the military sphere of life in this country.

5th house of Aries has Mars 06-20-25 (Lord House) – Refined, polite to a fault, spiritually inclined, could take people along with him, a leader’s leader and not afraid at all.

6th house of Taurus has Ketu ( R )  22-14-46 – His Ketu means that such is the high level of spirituality in the person that he is indifferent to feelings of jealousy; lust; anger either from inside him or even if it’s coming from outside; he’s just indifferent to it; will just continue in his own path which is determined by his strong lagna house influences that had a deep impression on his mind; when he was growing up. His lagna house gives him a strong moral footing.

10th house of Virgo has Moon 17-33-08 and Saturn 13-34-20 – Excellent potential for earning wealth; driven; active; mentally strong; a true karma-yogi; who by his own choice did not want to live or be a part of the world; where he saw so much suffering.

11th house of Libra has Jupiter 04-00-59 (Enemy) – Education, name, fame, power and prestige; everything was within his reach but he was indifferent to it.

12th house of Scorpion has Rahu (R )22-14-46 – House of Moksha and this also ensured that his name would live much beyond his lifetime.

Dashas in his lifetime

Though astrologically his 12th house Rahu was an extremely challenging time as per his chart, he rose above his chart and made the most of this time by deeply immersing himself into spirituality and his Guru guided his towards moksha/liberation/mahasamadhi – the preparation for which was made during this Rahu period. Hence, he was not impacted by the negative effect of his Rahu as can be seen from the strong life line, excellent head and heart line and double fate – all deep set in his palm. Finally, he used his 11th house enemy-positioned Jupiter to be known throughout the world as a spiritual force.

Moksha or liberation at the age of 39 years cannot be predicted by his chart. But the palm photo taken seven years prior shows there was turbulence in his life and he decided to take it head-on by deep spirituality and by traveling around the world spreading the message of Hinduism. It shows he was going towards eventual moksha. But at this level of deep meditative existence, the person can control when he or she would leave their body and hence the exact time of attaining liberation cannot be known. They can leave their body at will.

Hence, his palm is much better than his chart, but both the palm and chart say the same about his personality.

Caution: After reading this, please do not engage in self-palmistry. This is the excellent palm of a yogi and such people are rare. 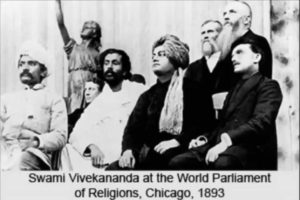 My journey from Vikas Suri to Vir Bhagat

An example of a change of palm lines